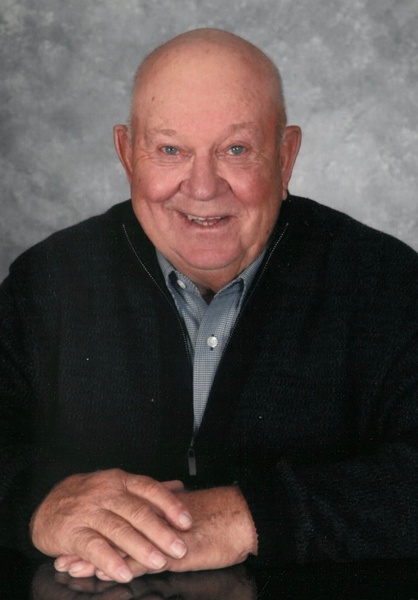 Wilton L. "Willy" Bunke, 92, of Rushford, MN was at his home when he was called to his eternal resting place on Sunday, December 12th 2021.
Wilton Leonard Bunke was born on September 21st 1929, in Winona, MN. He was the 10th of 13 children born to Paul C. and Ragna (Boe) Bunke. He was raised in Hart, MN where he attended parochial school through the 8th grade. On April 24, 1948, Willy was united in marriage with Ethel McElmury at Rushford Lutheran Church. Willy farmed in the Hart area until 1983, when he moved to Rushford where he continued to farm and run Bunke Sales which started in 1968. He was named Outstanding Young Farmer of the Year in 1958 and received many sales achievement awards throughout his career. Willy was an active member of his church and served on the Midland Coop Board, Hart School Board, Hart Creamery Board and many other organizations.
Willy is survived by seven children: Susan (John) Magnuson of Rushford, Donald (Lila) Bunke of Rushford, Duane (Ingrid) Bunke of Rushford, Kathryn (Larry) Eide of Rushford, Cindy (Jim) Severson of Rochester, Nancy (David) Brommerich of Winona and Terry (Richard) Crandall of Galena, IL; 32 grandchildren; 76 great-grandchildren; and 14 great-great-grandchildren, for a total of 122 and counting. Willy is also survived by a brother, Robert Bunke (Bettie Lou). He was preceded in death by his wife, Ethel; two sons: Richard and Ronald; granddaughter, JoNelle Bunke; great-grandson, Jackson Schneider; and eleven siblings: Paul, Edgar, Melvin "Pete", Esther, Earl, Myrtle, Elfreida, Grace, Marilyn, Stanley and Clinton.
There will be a funeral service for Willy at 10:30 a.m. on Thursday, December 16th 2021, at St. Mark Lutheran Church in Rushford. Burial will be in the St. John's Lutheran Cemetery in Hart. Visitation will be from 4:00 to 7:00 p.m. on Wednesday, December 15th at Hoff Funeral Home in Rushford.
Willy's funeral will be live streamed on St Mark and St Johns Lutheran Rushford Facebook page.
In Lieu of flowers the family requests memorials directed to St. Mark Lutheran Church.
Please leave a memory of Willy and sign his online guestbook at www.hofffuneral.com