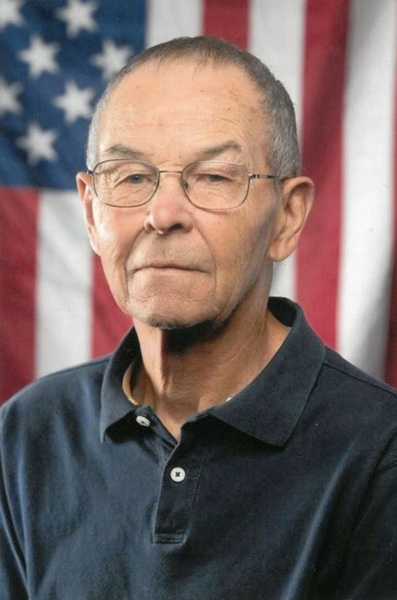 William Dale Omodt, age 86 of Houston, Minnesota passed away peacefully surrounded by his loving family on Saturday, October 16, 2021. He will always be remembered as a kind, gentle, caring, hard-working, loving man of God.
Dale was born on January 9th, 1935 in La Crosse, Wisconsin and grew up on a farm in Perkins Valley, in rural Houston, Minnesota. He graduated from Houston High School in 1952. Following high school he was employed by the Minnesota Department of Transportation in Winona and subsequently enlisted in the Army and was stationed in Korea as a radio operator.
Following his military service Dale returned to his work with the Minnesota Department of Transportation for 36 years as a trained surveyor with the later half of those years as a bridge inspector. He retired in 1990.
Dale married the love of his life, June Solberg, on March 8th, 1958. Together they purchased and resided on the farm in Perkins Valley, raising four children. They were married for 63 years.
In addition to his career with the state, his true passion was being a steward of his land as a farmer. He considered it a privilege and honor, and loved working on his farm; sharing all its beauty with his family. He showed his gratitude each and every day.
In retirement Dale was an elected member to the Money Creek Township board. The knowledge acquired in his state job made him instrumental in assisting with road work, maintenance, and upkeep. At the time of his passing he was still active in his role as chairman.
There was nothing in this world that Dale enjoyed more than time with his family. This included many special occasions over the years: the birth of each grandchild and great grandchild; baptisms, graduations, sporting events, holidays, weddings, music concerts, birthday parties, hayrides and sand hill truck rides. He also very much enjoyed meeting the friends of his grandchildren and showing them around the farm. At times he would take the opportunity to teach about farming. These are conversations that will be cherished forever by many.
Dale was preceded in his death by his parents, Lois (Johnson) and William Clement Omodt, sister, Joan Virock, and his beloved son, Steven Dale. He is survived his loving wife, June (Solberg), by his brother, Lon Omodt; daughters, Laurie (Dean) TeBrake, Janell Westerham (Victor Scharenbroch), Julie (Todd) Lundberg; grandchildren, Kristin (Bryan) Phelps, Ashley (Jason) Morehouse, Lindsey (John) Anderson, Lauren (Karl) Palmquist, Owen Westerham, Auna (Brian) Dempcy, Kate (Andrew Ammosov) West, William Lundberg, Hans (Emily) Lundberg, Heather (Cole) Thayer, Trevor (Kalley Schwitters) Lundberg; Great Grandchildren, Kailey Phelps, Zoey and Sofia Morehouse, Isaac and Nora Anderson; and a very special nephew, Perry Omodt. Dale also will be missed dearly by his beloved dogs; Jack, Jerry, and the neighbor dog, Lacy.
A service to honor his life will be held at Pleasant Valley Church, 1363 Homer Road, Winona, MN, on Saturday, October 23rd, 2021, at 3:00 p.m. Visitation will begin at 2:00 p.m. prior to the service.
A private family burial will be held at a later date at the Stone Church Cemetery in Houston. Hoff Funeral and Cremation Service in Houston is assisting the Omodt family with arrangements.