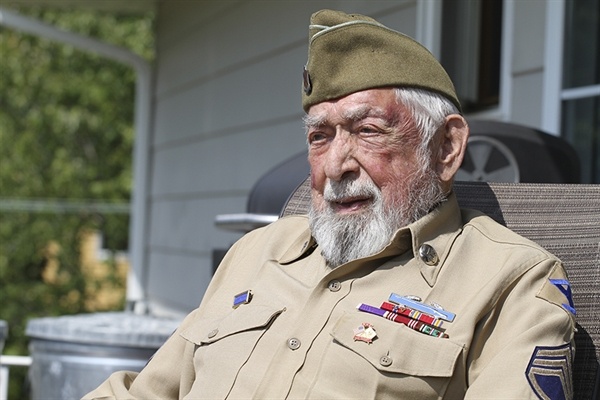 William R. (Bill) Stahl of Minnesota City died peacefully at Mayo Clinic Hospital, St. Mary's Campus in Rochester on September 11, 2021. The son of William T. and Della J. Stahl, he was born on August 31, 1925 in Kenosha, Wisconsin. During World War II, he served in France in the 26th Infantry Division in General Patton's 3rd Army. He was awarded two bronze stars, a purple heart and earned the rank of staff sergeant. After recovering from his wounds, he attended the University of Illinois and graduated in 1949 with a bachelor's degree in civil engineering. He was employed by the Illinois State Highway Department where he became the maintenance engineer of District 1, and later the bridge engineer. In 1980, he retired and took up farming near Wonewac, Wisconsin. After five years, he accepted the position of County Highway Commissioner of Vernon County, Wisconsin where he served for ten years. He retired again at the age of seventy and moved to a ninety-acre farm he purchased near Lanesboro, Minnesota to raise horses, sheep, chickens, and a steer or two, plus cultivated a large vegetable garden. He eventually moved to Minnesota City where he enjoyed caring for his yard and feeding birds on his back deck.
In 1946, Bill married Marie Freund with whom he raised two sons, William R. Jr. of Columbus, Georgia, and Timothy J., now deceased. Marie died suddenly in 1975. Several years later, he married Patricia Fort of Winona.
Bill was preceded in death by his parents, his two sisters, Doris and Rosemary, two brothers, Andrew and Donald, his wife Marie, and his son, Timothy. He is survived by his wife Patricia of Minnesota City and her sons, Thomas Fort (Kim), Timothy Fort (Connie) and Michael Fort, grandchildren Alyssa, Karlee, Brady, Travis, Jarrod, Cooper and Mitchell, and great-grandchild Tate, all of Winona. He is also survived by his son, William Jr., (Evelyn), his grandchildren William R. III of Freeport, Illinois, Dr. Benjamin R. (Kate) of San Francisco, California, and Christina M. of Columbus, Georgia, two great-grandchildren, William D. of Freeport, Illinois and Oliver Ansel of San Francisco, California, and many nieces and nephews.
A graveside service will be held October 9 at the family plot in St. James Cemetery, Kenosha, Wisconsin. He will be missed by his many family members and friends, yet his inspiration will always live with us. Hoff Celebration of Life Center- Goodview is assisting the family with arrangements.