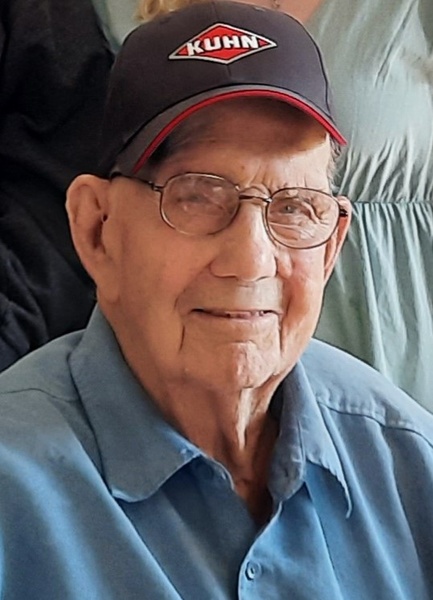 William 'Bill' Alfred McNally, age 89, passed away on Wednesday, March 2, at St. Anne's Healthcare in Winona. Bill was born on June 14, 1932 in Winona, the son of Alfred D. and Rose (Haase) McNally. He graduated from Winona High School with the class of 1949 and married the love of his life, Helen LaVonne Page, just 3 years later on August 16, 1952, at Central Lutheran Church of Winona. Their union was blessed with 5 children and they shared nearly 70 years of dedication to each other before Helen's passing in March of 2021.
Bill was a lifelong farmer and in his earlier years was involved throughout his community in many ways including the Witoka Calf Show, President of the Winona FFA Chapter, and Treasurer at Cedar Valley Lutheran Church. He held many jobs which included a salesman position for Pioneer Seed, hauling milk for Ridgeway Creamery as well as working for the Daley farms of Lewiston and lastly for many Amish families whom quickly became family friends. He was known for his hard-working, honest work ethic as well as his impeccable punctuality (unless he was waiting on Helen). Bill's family and God came first above all else; the ups and downs of life never caused his strong faith to waver and his family was proud to know that not even horses could drag him away.
Bill will be sadly missed by his children, Bonnie (Jon Erickson) Horton, Gary (Karen) McNally, Cathy (McNally) Colburn, Randy (Heidi) McNally, Kenny (Sonia) McNally; grandchildren, Steven (Kayla) Horton, Julie (Carroll) Hundorf, Heather (Dan) Brand, Emily (Richard) Koeller, Josiah McNally, Sarah (Scott Wieczorek) McNally, Ethan (Victoria Wagner) McNally, Bryan (Madison Waldo) McNally, Patrick (Morgan) McNally; great-grandchildren, Chelsey, Riley, Noah, Cody, Caleb, Beau, Irelynn, Shelbi, Samuel, Sawyer, Mikaela, Avery; great-great-grandchildren, Gabby as well as one on the way; siblings-in-law, Wanda McNally, Tom (Pat) Page; as well as many nieces, nephews, other extended family and friends.
He was preceded in death by his wife of 68 years, Helen McNally; parents, Alfred and Rose McNally; siblings, Charlotte (Lyle) Henderson, Ray McNally; siblings-in-law, Anita (Marlin) Gady; and a great-grandson, Grayson McNally.
A Funeral Service for Bill will be held at 11:00 AM on Tuesday, March 8, at the Hoff Celebration of Life Center in Goodview. Visitation will be held for 2 hour prior to the funeral from 9:00 to 11:00 AM. The Hoff Celebration of Life Center of Goodview is assisting family with arrangements.