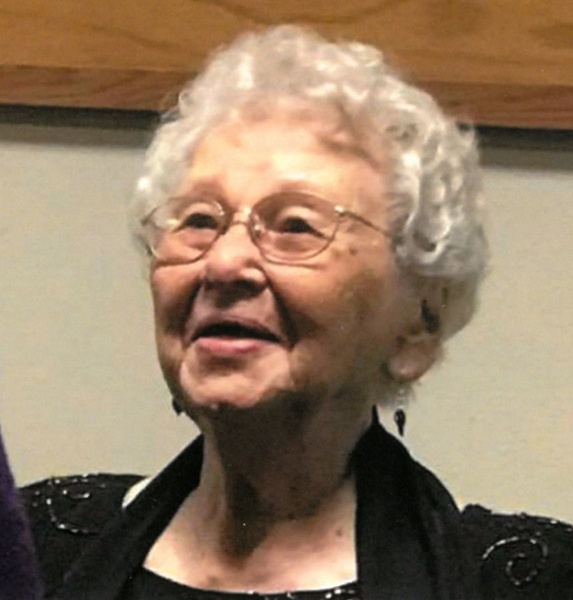 Virginia M. Arnold, 104, of Rushford, MN died on Thursday, December 2, 2021, at the Good Shepherd Lutheran Home in Rushford.
Virginia Mae was born on October 1, 1917 in La Crosse, WI where she was named, given a birthdate, and cared for by the nurses of the Henke Grandview Hospital (Mayo) and later Gundersen Lutheran Hospital. She was adopted as an infant by Archie and Mathilda "Tillie" (Peterson) Dent in Winona County, MN and baptized at Pilot Mound Lutheran Church. She was proud to have attended country school, District 54, south of St. Charles, MN where she was raised. Virginia used to cross country ski her way to school and enjoyed especially the Christmas Pageant each year. She was a member of 4H and won many blue ribbons at the Winona County Fair.
On March 2,1935, she married Francis Mann at St. Paul's Episcopal Church in Winona. To this marriage were born three sons: Stanley George, Kenneth Robert and John Donald. They later divorced. On August 16,1947, she married Freddie Arnold in Rushford. To this marriage were born two daughters: Gail Andra and Mary Inez. Virginia raised her family in the Rushford area. She worked as a waitress, grocery clerk and was a Civil Defense lookout volunteer. Virginia was a member of the First Presbyterian Church and church circle, "PW" as she alway called it, VFW Auxiliary, RedHat Club, Peterson Breakfast Club, Knitting Club, and the Birthday Club. She was a volunteer for meals on wheels. Virginia was an excellent cook and would find any reason to welcome family and friends to her home for a sit down dinner or pancakes. She even hosted events for the Bremmer Suites residents and was still planning our Thanksgiving dinner meal even though she could not be there. She enjoyed scrapbooking and attending all celebrations and especially the REA (mi Energy) parties. In later years her curiosity to find her birth parents became stronger and through the help of Anne Spartz and DNA testing she found she was of Sandin and Warp lineage and definitely Scandinavian. Above all her family and friends came first, she was always wondering what they were doing and appreciated every visit and phone call.
She is survived by four children: Kenny (Elaine) Mann of Goodview, MN, John (LeAnn) Mann of Bradenton, FL, Gail (Joseph) Bradley of Dickson, TN, and Mary (Val) Gudmundson of Rushford; Sixteen grandchildren, Craig (Jennifer) Mann, Robby (Ann) Mann, Kelly (David) Shand, Roxanne (Greg) Potts, Casey (Kendra) Mann, Todd (Sue) Mann, Teri (Tony) Henderson, Brian (Deb Jensen) Mann, Stacey (Kyle Young) Ahcan, Shari (Ron) Heaser, Steven (Karleah) Bradley, Nathan Bradley, Mary Bradley Reyes, Joseph Matthew Bradley, Kristoffer Gudmundson, and Kate Gellersen; 31 great-grandchildren; and 18 great-great grandchildren. Virginia was preceded in death by her husband, Freddie; son and daughter in law, Stanley and Bonnie Mann; two great great-grandchildren; and a grandson-in-law, Monty Gellersen.
In lieu of flowers the family prefers memorials directed to Bremmer Suites.
There will be a memorial service for Virginia at 2:00 p.m. on Thursday, December 9, 2021, at Hoff Funeral Home in Rushford. Burial will be at Oak Grove Cemetery in Rushford. Visitation will be from 4 to 7 p.m. on Wednesday and one hour prior to the service Thursday at the funeral home.
Please leave a memory of Virginia and sign her online guestbook at