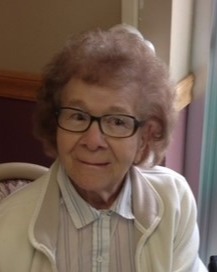 Verta F. Johnson, 91, of Rushford, MN died on Monday, November 28, 2022, at the Good Shepherd Lutheran Home in Rushford.
Verta Faye Louks was was born 1 of 20 children to Virgil and Florence (Simpson) Louks on April 17, 1931, in Martin County, MN.
Verta grew up in Kasson, MN, where she worked at the Kasson Bakery. On July 31, 1953, she was united in marriage with Roger Johnson. In 1959, the couple moved to Rushford. Verta cleaned the St. Joseph's Catholic Rectory in Rushford as well as some other residences. She also worked at the Rushford Bakery, Rushford Municipal Liquor Store, and her son Butch's Drive Inn in Rushford. Verta enjoyed collecting angels and cardinals, playing Bingo, listening to music, shopping, her special friendships with Marion Dahl and Heidi Johnson. She especially enjoyed spending time with her grandchildren and great grandchildren. She was a woman with a lot of spunk. Verta had a very strong will and was known to be a prankster. She was a member of Rushford Lutheran Church.
Verta is survived by three sons: Butch Johnson, Rick (Barb) Johnson, and Robbie (Tanya) Johnson; five grandchildren: Christopher "Chip", Kaycee (Jamie), Kyle, Brandon (Naomi), and Bryant; four great-grandchildren: Mason, Harper, Colt and Chase; and five siblings: Vivian, Roger, Pat, Linda, and Terry.
She was preceded in death by her husband and 14 siblings: Bill, Wayne, Kenneth, Bob, Jerry, Dick, Jim, Grace, Darlene, Betty, Mary, Bonnie, Audrey, and Judy.
There will be a funeral service for Verta at 11:00 a.m. on Monday, December 5, 2022, at Rushford Lutheran Church with Pastor Steve Chellew officiating. Burial will be in the Rushford Lutheran Cemetery. Visitation will be from 4:00 to 7:00 p.m. on Sunday, December 4, 2022, at Hoff Funeral Home in Rushford, and one hour prior to the service on Monday at the church.
Please leave a memory of Verta and sign her online guestbook at www.hofffuneral.com

Verta's family wants to extend a special thank you to the staff at the Good Shepherd Lutheran Home for all of their attentive, loving care and wonderful friendship.