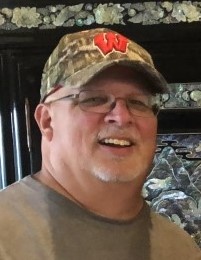 Thomas Alan Kelleher age 56 of Trempealeau, WI was born on Easter Sunday April 18th, 1965 at Vernon Memorial Hospital in Viroqua, WI to Daniel & Bonnie (Ryder) Kelleher. He graduated from GET High School in 1983. On October 3rd, 1987 he married the love of his life, Sandra Louise Johnson. He went on to a 30-year career with the CIA, retired in 2017 and spent his time playing golf, beating family members at cards, watching football, and driving around town playing Pokémon Go.
Tom passed away on September 28th, 2021 after nearly 34 years of marriage. In addition to his wife Sandy, he is survived by his daughter Allison Orrie, her fiancé Dillan Konkel, and his son Mitchell Thomas. Also surviving are his parents, brothers Steve & Tatiana Kelleher and Mike & Sara (Zittlow) Kelleher and their children, his father & mother-in-law Brad & Sharon (Palmer) Johnson, godmother Jane Hawes, as well as many brothers- & sisters-in-law and multiple nieces & nephews. Tom was preceded in death by grandparents Bob & Orrie (Veto) Ryder and Merle & Evelyn (Mack) Kelleher and his cousin Bill Ryder.
Visitation will be Friday, October 1st from 4-8pm at St. Bartholomew's Parish in Trempealeau, WI. At St. Bart's on Saturday, October 2nd, there will be a short visitation from 10-11am followed by a service at 11am. There will be a luncheon reception after the service. Hoff Celebration of Life Center, Goodview, is assisting the family with arrangements. Please share a memory of Tom and sign his online guestbook at www.hofffuneral.com.