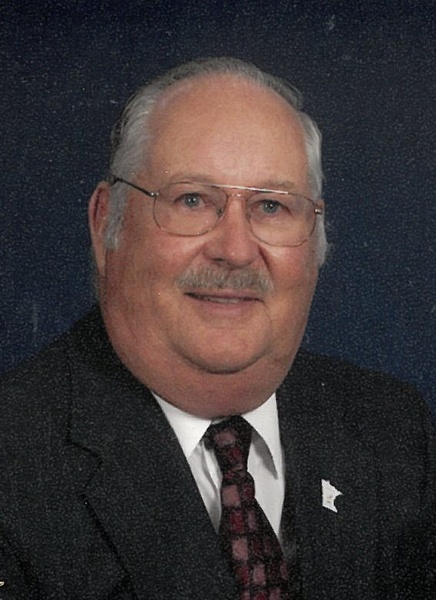 Thomas Norman Heim, 87, of St. Charles, died Tuesday, January 25, 2022, at home, surrounded by his loving family. Tom was born September 19, 1934, to Norman and Vernice (Stevens) Heim on the home farm north of St. Charles. He attended country schools and graduated from St. Charles High School in 1952, where he was active in FFA, class plays, and played football. Tom also belonged to the Crystal Springs 4-H club. Tom married the love of his life, Olivia Kanz, on July 16, 1955 at St. Rose of Lima Catholic Church in Lewiston. They ran a dairy farm north of St. Charles where they raised their six wonderful children.
Tom was an Archer Oil Dealer and became district manager in 1986. He then retried from farming and moved his family to Cresco, Iowa from 1986 - 1997. In Cresco, Tom belonged to St. Joseph Catholic Church and the Cresco Chamber of Commerce. Following his retirement in 1997, they moved back to his farm at St. Charles. In his retirement, Tom bought a sawmill, using the lumber he sawed in furniture making for family, friends, and his church.
Tom and Olivia traveled to all fifty states. They enjoyed Cruises in the Caribbean, through the Panama Canal, and to Alaska. They enjoyed bus trips to the Canadian Rockies and the Calgary Stampede. Tom was active in St. Charles Borromeo Catholic Church as an usher and greeter. He was a charter member of the Men's Club and started the annual Fish Fry during Lent. In his early years he served on the Parish Council and was a member of the Holy Name Society. Tom and Olivia were a part of the same 500 card club for over 50 years, also taking trips with the group. Tom enjoyed cheering for the Vikings, playing pool, horseshoes, and cribbage with the guys, as well as watching his grandkids ball games. Tom and Olivia enjoyed dancing to old time and country songs across the area dance floors.
Tom was an active member of the St. Charles Moose Lodge #1114, serving as Governor of the lodge in 2008 - 2009. He was named Top Minnesota Governor of the Year in 2009 and was awarded the Lifetime Achievement Award in 2014. In 2015, Tom was inducted into the Winona County Fair Hall of Fame. He was proud of his restored Oliver tractors and even belonged to the Great Northern Oliver Collectors Club. Tom was active in Saddle Club, raced horses, and stock cars, bowling, and belonged to the Jaycees. As a Jaycee, Tom was active in clearing the woods for what is now Jessen's Park. Tom was named Outstanding Young Farmer of the Year in 1962 by the Jaycees. He was active in the NFO, serving as county president for several years. Tom loved to deer hunt with his brother, sons, and nephews.
Survivors include his wife of 66 years, Olivia, six children: Allyn (Valerie) Heim, Dale Heim (Marie Samuelson), Jayne (Alan) Ihrke, Dennis (Wendy) Heim, Scott (Tricia) Heim, and Karen (Mikel) Walters, sixteen grandchildren, 20 great-grandchildren and a sister-in-law, Shirley Heim. Survivors also include Olivia's sisters: Geraldine (Darrell) Sturgis, Donna (Pat) Daley, Bernadine (John) Mayzek, and Mary (Jim) Paszkiewicz, sisters-in-law, Nadine and Betty Kanz, and several nieces, nephews, and cousins. Preceding him in death were his parents, Norman and Vernice, brother Kenneth, two infant children, Teresa and Philip, grandson, Randy, infant granddaughter, Erica, four brothers-in-law, Bob, Tom and Dick Kanz, and Oliver Younger, a sister-in-law, Betty Younger, and sister-in-law, Janet Kanz.
Funeral Services will be 11 a.m. Monday, January 31, 2022, at St. Charles Borromeo Catholic Church, with the Reverend Tim Biren officiating. Burial will follow in Calvary Cemetery. A visitation will be at the church, from 2-6 pm. Sunday and 10 - 11 a.m. Monday. Pallbearers will be Ehren, Travis, Adam, Justin, Corey, Alex, and Austin Heim, Chase and Blake Walters. Hoff Funeral Service of St. Charles is assisting the family with services. www.hofffuneral.com.