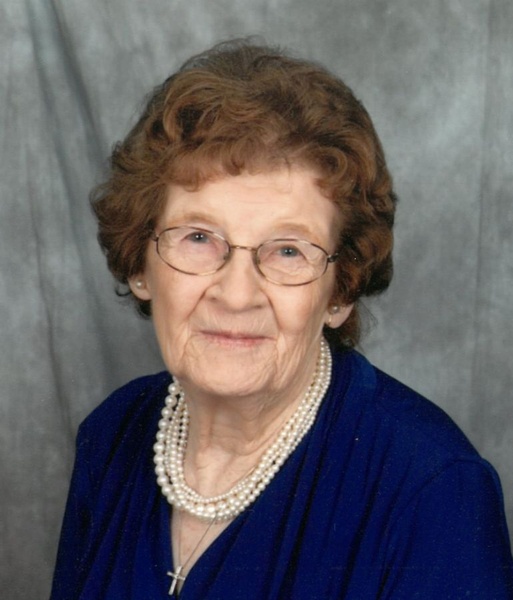 HOUSTON, MN - Thelma Johnston, 94, of Houston, MN passed away peacefully with
family by her side on Monday, June 27, 2021, at Gunderson Health System in La
Crosse, WI.
﻿Thelma Corrine Morken was born on August 30, 1926, to Obert and Cora (Ekre)
Morken.  She and her younger sister, Grace grew up on the family farm in
Yucatan Valley and attended Badger Country School. She graduated from Houston
High School in 1944, and Mounds-Midway Academy in St. Paul, MN as a registered
nurse in 1947. It was war time and since she and classmates were considered cadets,
the government paid for her education. After graduation she worked at the Veterans
Hospital in Minneapolis, MN.
Thelma later returned to Houston to marry Ralph Willis Johnston on March 19 th ,1949.
She loved all aspects of being a farm wife, including growing a large garden and
canning and freezing many fruits and vegetables.
Thelma worked as a registered nurse (RN) for several years at Valley View Nursing
Home in Houston. She was always proud of her RN status and would remind her
medical caregivers at Heritage Court that she too was once a medical professional,
most recently as she was getting the COVID vaccine. Her extended family always
consulted with her first if they had a medical question.
Thelma adored babies, which is probably why she had 5 children over 10 years. Always
the supportive mother, she enjoyed following her children's extra-curricular activities
and liked to watch her boys play all sports with the exception of football. (That must
have been the nurse in her). When asked once how she juggled 5 kids, part time work
and being a farm wife, she said, "It was fun and we were young."
In her later years, Thelma loved her morning coffee and going on drives through the
countryside with her children. Thelma is survived by her children: Marsha, Ruth, Steven
(Karen), Susan (Jay Kaskel) all of the Twin Cities, and David (Tammy) of Houston; three
grandchildren: Melissa (Dylan Burrow) Alison (Nick Culhane), and Carson; and great-
grandchildren: Tucker, Shelby, and Selene; nieces and nephews: Doug (Mary) Jore Joe, Bree, Therese, Bill Christensen, Marle Christensen (Maria Nardella), Lucas, Coral (Don Stengel).
She was preceded in death by her husband, Ralph and sister, Grace Jore.
Thelma was active in Garden Club, Women of the ELCA / Ladies aid, PTA, and Music
Mothers. She remained close to her friends from nursing school, attending regular
reunions.
There will be a funeral service for Thelma at 11:00 a.m. on Wednesday, July 7, 2021, at
Cross of Christ Lutheran Church in Houston with the Reverend Linda McPeak
officiating. Burial will be in the Stone Church Cemetery in rural Houston. Visitation will
be one hour prior to the service on Wednesday, at the church.
The family prefers memorials directed to Heritage Court, Cross of Christ Church, or
Gundersen Hospice.

Please leave a memory of Thelma and sign her online guestbook
at www.hofffuneral.com