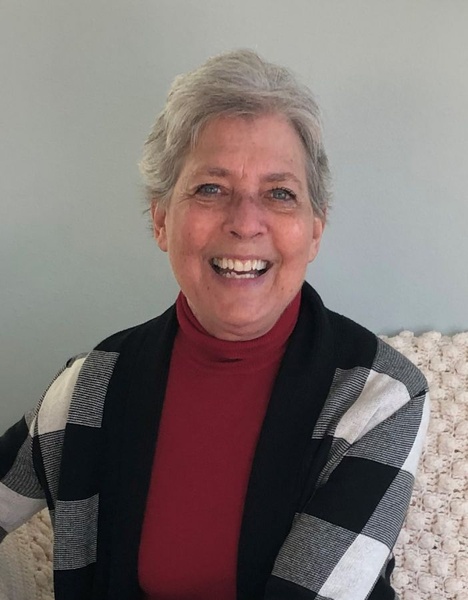 Susan Hart, 71, of Rushford, MN died at her home on Sunday, January 16, 2022.
Susan described herself as, "a child of God" and said she was,
"abundantly blessed."
Susan was a devoted wife, mother, grandma, sister and friend. She
enjoyed painting, gardening, and her many friends at the library.

Susan was born in Lake City, MN to Howard and Lorraine (Wiley) Fick.
She was the oldest of two daughters and was always very close to her
sister. Susan graduated from Lincoln High School in Lake City in 1968.
She then graduated with a Bachelor of Science Degree in nursing in
1972 from Viterbo University in La Crosse, WI. Susan enlisted in the
U.S. Air Force as a 1st lieutenant, and served as a Registered Nurse.
She was honorably discharged in 1974. Susan married Robert Hart on
July 26, 1974. They lived in Rolla and Columbia, MO before moving to
the Rushford, MN area in 1978. Susan served on the Rushford - Peterson
school board for several years and worked at the Rushford Public
Library from 1994 until her retirement in 2019. The Rushford community
will miss Susan.
Susan is survived by her spouse, Robert "Bob"; sister, Barbara
(Richard) Sorenson of Bella Vista, AR; daughters: Vicki (Chris)
Pierret of Rochester, MN, and Erica (AJ) Cook of Holmen, WI; and
grandchildren: Lucas, Simon, Kadence, and Payton.
Susan was preceded in death by her parents; parents-in-law, Harold and
Norma Ruth Hart of St. James, MO; several aunts and uncles; and her
grandparents.
There will be a Memorial Mass for Susan at 10:00 am on Tuesday,
January 25, 2022, at the Cathedral of the Sacred Heart Church in
Winona with Msgr. Thomas Melvin and Rev. Mark McNea officiating.
Burial will take place at St. Mary's Cemetery in Winona. Visitation
will be from 4 to 7 pm on Monday, January 24, at Hoff Funeral Home in
Rushford and from 8:30 to 9:30 am on Tuesday morning at church. The
rosary will be recited at 9:30 am Tuesday at church.
Please leave a memory of Susan and sign her guestbook at www.hofffuneral.com