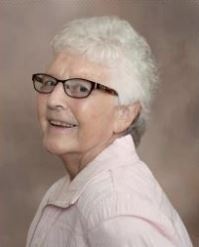 Shirley L. Anderson, age 85, passed away peacefully on Thursday, August 4 at St. Anne's Extended Care in Winona. Shirley was born on November 1, 1936 in Rushford, the daughter of Edward and Ellen (Bartelson) Volkman. She was raised on her family farm with her brother and sister and attended school in Rushford where she met her future husband and love of her life, Richard Anderson. Shirley and Richard were united in marriage on February 26, 1955 at the Rushford Lutheran Church and their union was soon blessed with seven children; together Shirley and Richard shared 60 years of faith and dedication until Richard's passing in July 2015.

Shirley was a proud and devoted wife, mom, grandma and great-grandma; she cherished her family as well as her faith. She was an active member of Rushford Lutheran Church, serving on the church council as well as President of the Women's Circle. Shirley was committed to following her entire families' sports endeavors; she loved to sit in the stands or bleachers at the kids' events and she was an avid Packers and Twins fan. Shirley had worked for Camera Art and Henry Colbenson Insurance over the years.

She was preceded in death by her husband of 60 years, Richard Anderson; parents, Edward and Ellen Volkman; sister, Juanita Ladewig; brother, Lennie Volkman.

Special thank you to St. Anne's, Winona Hospital, GSLH and Jennifer Scheck for their care and kindness this last year.

If you are unable to attend the services, please follow this link to a Live Stream of the service: