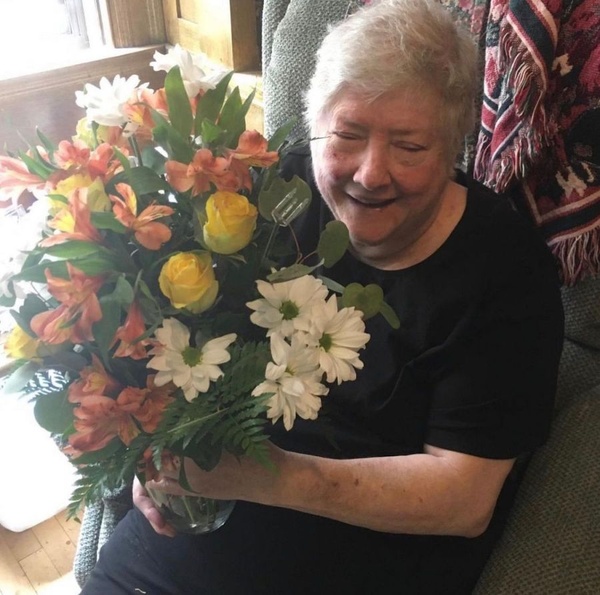 Sylvia Dianne Richins Cherry, lately of Winona, MN, died peacefully on January 6, 2022 at Pine View Rehabilitation and Senior Living in Caledonia, MN four days before her 78th birthday.
Sylvia was born in Phoenix, Arizona on January 10, 1944 to Orson Oriel Richins, Jr. (Jack) and Helene Windsor Richins. She was the middle of five children: Walter Richins, Hazel Irene Richins Light, Sally Richins Burdick, and Glenn Richins.
After a traumatic viewing of the cartoon "The Birth of a Toothpick," where a tree named Sylvia was turned into said dental instrument, the five-year-old Sylvia insisted that she be called Dianne for the remainder of her life. Of course, everyone complied. Dianne loved her siblings, especially when she could skillfully direct them in chores without lifting a finger herself. She loved telling stories of fooling her father by detaching the odometer and cruising the strip in Tempe (using a handkerchief to disguise her baby brother as a girl if he was in the car), learning to dance together by studying American Bandstand, and hiding under dirty clothes in the closet to avoid getting caught skipping school when dad came home for lunch.
Dianne and Ivan Leroy Cherry crossed paths through their younger years. The first time was in grade school when she dressed Ivan up and down for picking on another kid. This was followed by various family events to which Ivan's cousin invited Dianne. Dianne fell for him when his cousin asked her to visit Ivan in the hospital where he was healing from a football injury. Dianne brought her record player along and thought he was so cute, all hopped up on pain medication, trying to play it cool.
Dianne and Ivan were married on December 7, 1963 in Mesa, Arizona. They had six children: Kevin Leroy, Kristen Dyanne (Aaron Arnold Young), Matthew Ivan (Dennis Wilson Muñoz Vergara), Allisa Dawn, Bethany Amanda (Joseph Robideau), and Jason Richins. Eleven grandchildren followed: Elizabeth, Madeline, and Hannah Young; Jadyn (Sean McGrath), Jayk, Jess, Jory, and Jacy Cherry; Tennyson Sauraan; and Ethan and Carter Kingsley. They had one great grandchild: Soma Cherry.
When they weren't tending to their growing family, Dianne and Ivan loved to take drives, read spy novels together, dance, play cards, and make their garden interesting. Dianne's favorite trip with Ivan was to Italy.
Dianne had the opportunity to stay home when her children were growing. She created a space where they had the freedom to create without fear of making a mess, read what they were interested in, and think their own thoughts. She had crafts for them to make, special foods they loved to eat, and she made celebrations fun. They were taught to clean up quickly only when you had to or when guests were coming, to do the dishes when the guests were gone, and to dust, at best, twice a year. She made sure these important life skills were passed down to her grandchildren.
Dianne loved to read, listen to music, craft, and travel. She read so voraciously that she was a wordsmith with a quick wit and a sharp tongue. She could praise you or put you in your place with the most beautiful words. Until her dying day, she did not miss a trick even after she lost her vision. She consumed books on tape provided through the Blind Association and the Library of Congress. She loved to talk about books with other book lovers. When she would read a music review magazine, she would call up the artist on Spotify on her Google Home and listen to their latest album. She listened to the music her children and grandchildren shared and had spirited conversations about what she liked. She would also eagerly share a new artist, album, or song she discovered. Before losing her vision, she loved to paint folk art on furniture and décor and owned a successful folk art shop for several years in St. Johns, Arizona. Even after losing her sight, she amassed an astounding collection of scrapbooking materials. She loved when family and friends would come over and create a scrapbook page for her, describing the photos and decorative items they were using, and listening to the memories that the photos conjured. She traveled to various parts of America with friends after Ivan's death from cancer at age 49.
Dianne was preceded in death by her husband Ivan, son Kevin, her parents Jack and Helene, and brother Walter.
Dianne's family extends their thanks to the many doctors and nurses at Winona Health, Mayo Clinic, Gundersen Health, Lancaster General Health (Pennsylvania), Benedictine Living Center, Valley View Healthcare & Rehab, Pine View Senior Living, and Moments Hospice who provided exceptional care during her many health crises over the past two decades.
A funeral service will be held on Zoom on Sunday, January 23 at 1 p.m. Central time. Please contact a family member for the link should you wish to attend. A musical celebration of life will take place in St. Johns, AZ in August 2022 when the family can physically gather together.
In lieu of sending flowers, the family asks that you send donations to Minnesota Braille & Talking Book Library, 388 SE 6th Ave, Faribault MN 55021, memo: Sylvia Dianne Cherry.