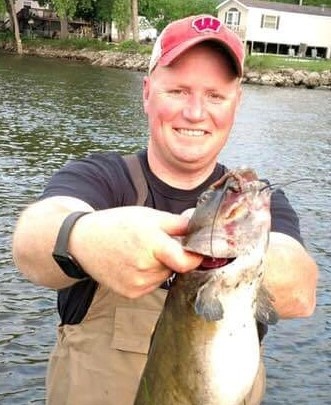 Ryan's funeral can be viewed live stream at https://www.redeemersaints.org/

Ryan "Red" Robert Schultz, 44, of St. Charles, MN died unexpectedly on Tuesday, January 18, 2022, at his home. Ryan was born on August 6, 1977, in La Crosse, WI to Robert Schultz and Betty Ekern. He graduated from Westby High School in 1996. Following high school, Ryan went on to Minnesota West Tech in Pipestone, MN and earned a degree in meat cutting. Ryan later moved to St. Charles where he worked for Mike's Food Center. He currently was a regional sales manager for Bakalar's Sausage Company in La Crosse.
Ryan was an avid outdoorsman. He loved hunting, fishing, trapping, and biking. Ryan filled so many people's lives with happiness. His children and Gaby were his world. He was always supportive and loved unconditionally. He put a smile on so many people's faces and hearts with his sense of humor and deep caring of others. Ryan was known for his phenomenal warm hugs. He truly was a one-of-a-kind guy and will be so deeply missed. It was just too soon for God to take him home. However, he is in everlasting life, spending time in Heaven with family who have passed before him providing love and smiles to them.
Survivors include his children, David (Ellyna Van) Nance and granddaughter Eloise Nance of Denver, CO, Liliam Lewis Juarez, and Alan Gabriel Hernandez Juarez; the mother of his two younger children, Gaby Lewis; his father, Robert (Sherry Stoskopf) Schultz of Chaseburg, WI; his mother, Betty Ekern (Bob Johnson) of Houston, MN; his siblings, Travis (Mandy) Schultz of Kasson, MN and their daughter, Olivia, Quinn Schultz and Clare Schultz of Chaseburg, WI; and his best friend, Justin "Chubbs" Barkeim of St. Charles, MN. He is also survived by his aunts, uncles, cousins, and friends.
He was preceded in death by his grandparents, Gerald and Marilyn (Hanson) Schultz and Harland and Joyce (DeBoer) Ekern.
Funeral Service will be at 7:00 p.m. on Tuesday, January 25, 2022 at St. Charles Borromeo Catholic Church in St. Charles, MN (One mile East of St. Charles on Highway 14), with Reverend Tim Biren officiating. Burial will be held at a later date. A Visitation will be from 4 -7 p.m. on Tuesday at the church. Hoff Funeral and Cremation Services - St. Charles, is assisting the family with arrangements. www.hofffuneral.com