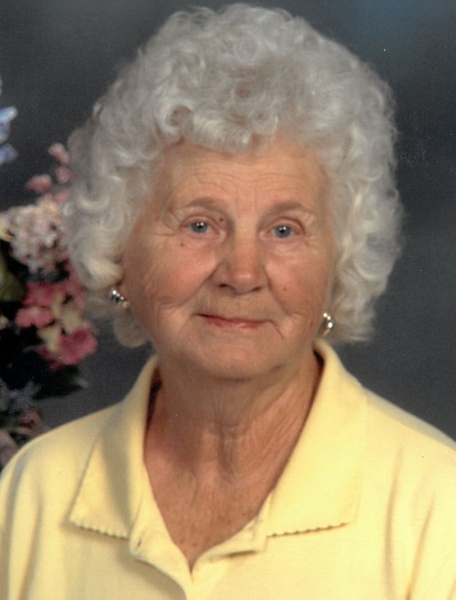 Ruth Luverne Sherry, age 98, passed away on Tuesday, March 29 at the Gundersen Tweeten Care Center in Spring Grove. Ruth was born on July 17, 1923 in Winneshiek County, Decora, IA, the daughter of Knut and Clara (Selness) Iverson. She was granddaughter to the first child of European descent born in Canoe Township. Ruth was baptized and confirmed at Decorah and Hauge Lutheran Church; she attended rural Knoeke school and graduated from Decorah High School in 1942. After graduation, Ruth traveled to Chicago and worked at the Norwegian American Hospital as well as the Mars Candy Company.
Ruth married Lt. J. G. Albert Sanford Sherry in Chicago on December 14, 1943; they lived in Charleston, SC, and San Diego, CA, during World War II. Ruth worked for Rohr Aircraft in La Jolla, CA, while Albert was stationed in San Diego. Ruth and Albert moved to a farm on Twin Ridge in Houston, MN, following the end of the War. Ruth was Albert's right hand and especially enjoyed driving the tractor. She enjoyed working alongside Albert milking cows and raising tobacco.
Ruth enjoyed baking, cooking, sewing, and making quilts. She enjoyed music whether it was singing, playing piano, or dancing. She liked to travel as she saw both the Atlantic and Pacific Oceans and much more. Ruth was a member of Sheldon Homemakers, a 4-H leader, as well as belonging to Black Hammer Lutheran Church and Cross of Christ Lutheran Church; she was involved in the various circles and aids at both churches. She delivered to her community through Meals on Wheels for many years, too. Above all she was there for her children throughout their many 4-H projects, playing cards, checkers, fox & geese, sliding, roller skating, and playing softball.
Ruth will always be missed by her children, Ruth (Alden) Johnsrud of Spring Grove, Diane (Del) VanEmmerik of Maple Grove, Karen Nelson of Marshall, Jandeen Rud of Spring Grove, Sever (Tricia) Sherry of Houston; grandchildren, Joalyn (Rodney) Torgerson of Houston, Mark (Elissa) Johnsrud of Chatfield, Michelle (John) Lund of Houston, MN, Janelle Sherry of Hastings, MN, Renae Sherry of LaCrescent, MN, and Kimberly Sherry of LaCrosse, WI, Autumn (Josh) Wiste of Plymouth, Terrean (Jeff) Schmidgall of Longmont, CO, Kathrina (Jared) Menzel of Frederick, CO, Ricky (Amber) Rud of St. Cloud, Bjorn (Amanda) Rud of Spring Grove, Justin (Andrea) Nelson of Wood Lake, MN, Nikki (fiancé Alex) Sherry of Michigan, Stuart Sherry of Spring Grove, Jason Sherry of Michigan, Alex (Alexandra) Sherry of Florida; 33 great-grandchildren; 4 great-great-grandchildren; as well as other extended family and many friends.
She was preceded in death by her beloved husband of 55 years, Albert; parents, Knut and Clara Iverson; sons, Ronnie, Nathan, and Wayne Sherry; siblings, Ingrie, Lester, Charlotte, and Ethel; and sons-in-law, Dennis and Larry.
Funeral Services for Ruth will be held at 11:00 AM on Saturday, April 23 at the Cross of Christ Lutheran Church in Houston. Friends and family may visit for one hour prior to the services at church from 10:00 to 11:00 AM. The Hoff Funeral Home of Houston is assisting Ruth's family with arrangements.