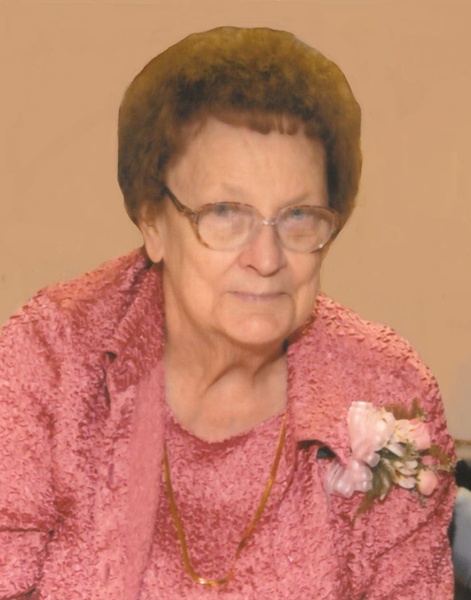 Ruth B. Knutson, 101, of Peterson, MN died on Thursday, December 9,
2021, at the Good Shepherd Lutheran Home in Rushford, MN.
Ruth Burnette Benson was born on November 25, 1920, in Peterson to
Bent C. and Cora (Evenson) Benson. She was raised in Peterson and
graduated from Peterson High School. On September 12, 1945, Ruth was
united in marriage with Emer Knutson at Our Saviors Parsonage Chapel
in Peterson. The couple farmed at North Prairie for a few years and
later moved to Peterson. Ruth worked at the Good Shepherd Lutheran
Home as a nurse assistant for many years until her retirement in 1991.
She was a member of the Peterson Legion Auxiliary, Grace Lutheran
Church, as well as the circle and ladies aid. Ruth enjoyed trips to
Texas and Arizona, coffee group, cardinals, needlepoint, embroidery,
baking, the Minnesota Twins and especially following her
grandchildren's athletics and activities.
Ruth is survived by four children: Karrol "Sam" (Mercedes) Benson of
Houston, MN, Catherine (Wayne) Haug of Lanesboro, MN, Renae (Dennis)
Novak of Sheboygan, WI, and Pam (Richard) Johnson of Peterson; eleven
grandchildren: Randy (Kim) Benson, Michael (Karen) Benson, Mary Kaye
(Vern) Bunke, Paula Haug, Jonathan Haug, Jason Haug, Crystal (Jeremy)
Vrieze, Ashley (Kate) Johnson, Melissa (Travis) McCabe, Zachary
(Serena) Johnson, and Courtney (Jordan) Williams; twenty
great-grandchildren, plus one on the way; and twelve great-great
grandchildren.
She was preceded in death by her husband, parents and six brothers.
The family prefers memorials directed to Grace Lutheran Church.
There will be a funeral service for Ruth at 11:00 a.m. on Tuesday,
December 14, 2021, at Grace Lutheran Church in Peterson with The
Reverend Sarah Walker Brown officiating. Burial will be in the West
Grace Lutheran Cemetery in Peterson. Visitation will be one hour prior
to the service on Tuesday at the church.
Hoff Funeral Home in Rushford is assisting the family with arrangements.
Please leave a memory of Ruth and sign her online guestbook at
www.hofffuneral.com