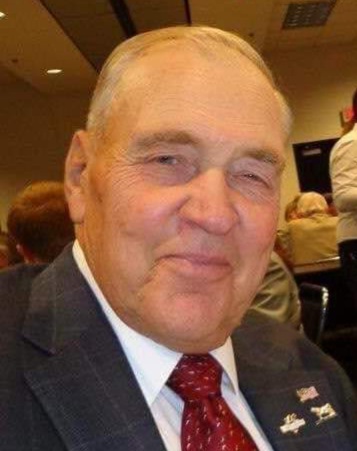 Russell John Wirt, age 89 of Lewiston, passed away peacefully on Thursday, May 20 at St. Anne's Benedictine Community in Winona. Russell was born on October 15, 1931, the son of Elmer and Maude (Beech) Wirt; he was born on the very same family farm on which he was raised and would eventually farm himself. Russell graduated from Lewiston High School as the Valedictorian and went on to attend the University of Minnesota in Saint Paul. He was united in marriage to Donna Jean Campbell on March 1, 1952 and their union was blessed with four children.

As a 4th generation farmer Russell was a dairy industry pioneer, especially in Minnesota, and accepted the responsibility of many active leadership roles throughout his life. He served as the president of the American Guernsey Cattle Club and the Minnesota State Holstein Association. He helped organize the Winona County Dairy Herd Improvement Association (DHIA) as well as serving as the first secretary of the greater Minnesota DHIA. Russell was also the chairman of the American Dairy Association for Winona County, served as director of the Minnesota Livestock Breeders, and spent many years as a 4-H Leader. He received Hall of Fame Honors from the Minnesota Livestock Breeders Association in 1982, was awarded the Longtime Meritorious Award from the Minnesota Holstein Association in 2010, and was honored as a Dairy Industry Pioneer by the National Dairy Shrine in 2014.

Russell judged many state-wide dairy shows of all breeds from California to Maryland. In 1979 he judged the National Guernsey Show in Fresno, CA, as well as the 1980 Royal Easter Show in Sydney, Australia. He was also the official American Guernsey Cattle Club representative at the 1982 World Guernsey Conference in the Union of South Africa.

Outside of his farming, Russell loved to be a husband, father, and grandpa; he also enjoyed spending quality time fishing on lakes and rivers as well as tending to his gardens. He was active in the Brethren church as a youth, including the "Guernsey quartet", and his faith sustained him as he aged.

Russell will always be remembered by his wife of 69 years, Donna; children, Duane (Elizabeth) Wirt, Dennis (Kim) Wirt, Douglas (and special friend, Glenda) Wirt, and Kimberly (Gary) Asche; grandchildren, Kayte Haaland, Darrin, Karissa, Denton, and Dustin Wirt, as well as Bekki Flesner, Abigail Warmka, John, Andrew, and Austin Asche; great-grandchildren, Claire and Ava Haaland, Mariah, Brekken, Lauren, and Roselyn Wirt, Halle Jo, Dayton, Bently, and Bella Wirt, Chloe Warmka, Madeline, David and Jacob Flessner, as well as Aiden and Ellen Asche; siblings-in-law, Marian Burgdorf, Phyllis Ayen, and Cathy Campbell; as well as other extended family and friends. He is also survived by the many cherished cows on the family farm which has been a staple in the Wirt family since 1856.
He was preceded in death by his parents, Elmer and Maude; sisters, Becky (John) Walch and Mary Alyce (Roman) Walch; siblings-in-law, Lyle Campbell, Alan Campbell and Les Burgdorf.

Russell's family has entrusted the Hoff Funeral Home and Cremation Service of Saint Charles with his arrangements and a private family service will be held. Please leave a memory of Russell in his online guestbook at www.hofffuneral.com. Interment will be in the Church of the Brethren Cemetery.

In lieu of flowers, please send contributions to the Brethren Cemetery Fund.