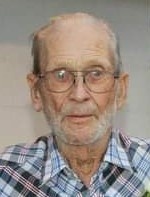 Ronald Dybing, 90, of Houston, died Friday, November 19, 2021, surrounded by his family, at Gunderson Medical Center in La Crosse. Ron was born June 20, 1931, in La Crosse to Gilbert and Addie (Gydal) Dybing. He served in the United States Army, stationed in Alaska. On July 3, 1958, Ron and Cynthia Eide, of Rushford, were married in Canton. Ron drove semi, worked construction. His life's work was farming in Looney Valley, where neighbors were considered family and looked after each other. Ron also did custom combining and silo filling. Ron was part owner of a small plane and enjoyed flying throughout the area. He and Cynthia traveled often, frequently loading up their three girls and driving to the western states as he connected with former military buddies. He was ready to join any of his daughters on a driving trip at a moment's notice. He also enjoyed playing euchre. Cynthia died in 2009. He later entered Heritage Court in Houston.
Survivors include his daughters; Maxine Dybing of Houston, Debra (Larry) Gaustad of Houston, and Lisa (Cecil) Graf of Hokah, six grandchildren; Randi (Josh) Rhode Barnett of Erwin, TN, Samantha Rhode Cantrell of Johnson City, TN, Adam Gaustad of Caledonia, Metta (Marc) Kuehntopp of Goodview, Jessica (Jeff) Baylor of Batavia, IL, and Melissa Graf of Fargo, ND, six great-grandchildren; Kynlee Johnson, Brylee Johnson, Joseph Cantrell, Eli Cantrell, Mara Kuehntopp and Benjamin Kuehntopp, a sister Mary Botcher of Houston, many nieces and nephews as well as a cousin, Amy Shield of Houston. In addition to his wife Cynthia, Ron was preceded in death by his parents, Addie and Gilbert, a brother Ralph, a sister Lois, and a grandson-in-law, Stephan Cantrell.
Funeral Services will be 11 a.m. Saturday, November 27, 2021, at Looney Valley Lutheran Church in rural Houston, with Reverend Kari Charboneau officiating. Burial will follow in Silver Creek Cemetery. A visitation will be from 4 - 7 p.m. Friday, November 26, 2021, at Hoff Funeral Service in Houston, as well as one hour before services at the church on Saturday. www.hofffuneral.com.