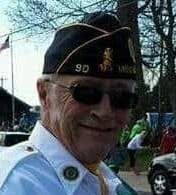 Richard A. "Dick" Rasmussen, 73, of Winona died Monday evening, July 27, 2020 at his daughters' home in Milaca. Dick was born June 10, 1947 in Rushford to Rollins and Elizabeth (Hanson) Rasmussen. He was raised on the family farm at Rushford and was a lifelong area resident. Dick served in the United States Navy during the Vietnam War. He and Barbara Oevering were married March 15, 1969 at McKinley United Church in Winona. Dick had farmed near Stockton. He later worked for Ken's Equipment in Lewiston for many years. In recent years Dick worked in the kitchen of the Lewiston High School.
Dick was a dedicated volunteer in the community. He lived by the motto's of 'Paying forward' and 'Giving back'. Dick served on Lewiston Ambulance, Lewiston Heartland Days committee, Lewiston American Legion Pos and the Legions military honors group. He was very active with Lewiston Lions Club, receiving their 'Hometown Hero' Award. Dick also enjoyed seeing the joy in children's eyes when he showed up as Santa.
Survivors include his four children, Rick Allen Rasmussen of Winona; Connie (Mike) Cline of Grinnell, IA; Cindy (Jim) Winn of Duluth and Kelly (Eric) Lawrence of Milaca, 10 grandchildren; Derek, Mike, Casey, Lydia, Noelle, Nick, Josie, Gavin, Ethan and Zander, five great-grandchildren, Emma, Braxton, Haley, AJ and Hunter, and his five siblings; Denny (Carolyn) Rasmussen of Winona, Dale (Sandy) Rasmussen of Rushford, Dian Biesanz, Mary (John) Larkie and David (Lynne) Rasmussen all of Winona. Dick was preceded in death by his wife, Barbara, in 2015 and by his parents.
Services to remember Dick will be 1 p.m. Friday, July 31, 2020 at Hoff Celebration of Life Center in Goodview/ Winona with Pastor Jeff Olson officiating. Burial will follow in Lewiston Public Cemetery with the Lewiston American Legion Post conducting military graveside honors. A visitation will be from 9 a.m. until time of services Friday at the funeral home. Dick Loved his country and his Lord. Please share a memory of Dick and view his video tribute at www.hofffuneral.com. In accordance with current restrictions, social distancing and face masks are required.