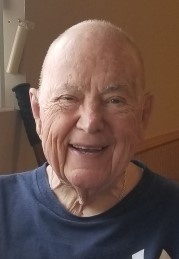 Richard "Bubber" Schaber, 89, of St. Charles died Wednesday, January 1, 2020 at Whitewater Health Services in St. Charles. Bubber was born the son of Leslie and Blanche (Daskoske) Schaber on June 10, 1930 in St. Charles. He graduated from St. Charles High School in 1948 and entered the United States Navy, serving from 1949 - 1956. In the Navy he was recognized as the Honor Man of Company 108 at the Great Lakes Center and served on the USS Leyte CV 32 aircraft Carrier. Following his service to the military, Bubber worked for J.R. Watkins as Regional Sales Branch Manager of the New York Division. He was later employed at First National Bank in St. Charles as Vice-President and general insurance agent. Bubber went on to work for Winona State College as director of bookstore operations for 25 years, receiving a Distinguished Service Award. Bubber and Linda Schneider were married on August 3, 1963 at St. Charles Borromeo Catholic Church. They made their home in St. Charles their entire married lives.
Bubber was a member of St. Charles Borromeo Catholic Church. Where he was active on the Parrish Board, Holy Name Society, Springfest and as a church helper for over 40 years. He was a Fourth Degree Knights of Columbus and received the Bishops Medal in 2015. Bubber was also active in the Boy Scouts as Executive Board Chairman. He was an active member of the St. Charles Moose Lodge. He was a member and Past Commander of the St. Charles Veterans of Foreign Wars and American Legion Posts. Bubber served as the Treasurer of the Winona County Fair Board for 50 years, entering the Fair's Hall of Fame in 1987. He received the Jaycee's, Citizen Distinguished Service Award in 1964 and the Outstanding Winona County Senior Citizen Award in 2013. Bubber enjoyed many big game hunting trips to Wyoming with his buddies.
Survivors include Linda, his wife of 56 years, three sons; John of St. Charles, Jody (Tammy) of Rochester Rick (Tracie) of St. Charles, two granddaughters, Abbie Schaber and Jordan (Al) Lange and two great-grandchildren, Trae and Mila. He was preceded in death by his parents Leslie and Blanche, his brother Ronald Schaber and sister Joan Brogan.
A Funeral Mass will be 11 a.m. Monday, January 6, 2020 at St. Charles Borromeo Catholic Church with the Reverend Tim Biren officiating. A private family burial will be in the spring at Calvary Cemetery. Visitation will be from 4-8 p.m. Sunday at Hoff Funeral Service in St. Charles and one hour before services at the church on Monday. The St. Charles V.F.W. and American Legion Posts will conduct military graveside honors at the church following services. Please share a memory of Bubber and view his video tribute, when it becomes available at www.hofffuneral.com. Bubber's family asks that memorials be directed to the St. Charles Veterans Park or an athletic scholarship being arranged in Bubber's name.