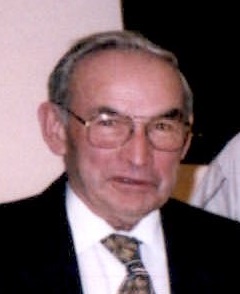 Ray A. Mueller, 89, of St. Charles died Saturday, July 4, 2020 at his farm home in hospice care. Ray was born February 17, 1931 in the Elba Valley to Alois and Mathilda (Putzier) Mueller. He was one of 12 Mueller children. Ray and Marcella Kronebusch were married November 15, 1958. They farmed in the St. Charles area for many years and was named "Farmer of the Year". He was an active member of the Quincy Township Board for 25 years. Ray enjoyed working with his animals, making toys and model cars in his workshop. He loved spending time with family and friends. Marcella died in 2011. Ray and Mary Monahan were married in 2016. He was a member of St. Charles Borromeo Catholic Church.
Survivors include his wife Mary, a daughter Kristine Mueller, a step-daughter, Carol (Greg) Bednar, three grandchildren; Brian, Jeanne and Susan, seven great-grandchildren, five siblings, Mary Janet Wegman, Rita (George) Haag, Cecile Schmidt, Rose Struckman and Margaret Mundt, brother in-law Gerald Knoll and a sister in-law, Joan Mueller and many nieces and nephews. He is also survived by Mary's children, Vivian, Stephen, Bernice, Cletus, Jim, Mark and Jenny and 25 of her grandchildren. In addition to his first wife Marcella, Ray was preceded in death by brothers, Alvin, Everett, Joe and Edward Mueller, sisters, Irene Decker and Emily Knoll, in-laws, Alice Jean Mueller, John Decker, Elinor Mueller, Bernard Wegman, Walter Schmidt, David Struckman and Carl Mundt. A Funeral Mass for close family will be at 11 a.m. Thursday, July 9, 2020 at St. Charles Borromeo Catholic Church in St. Charles, with the Reverend Tim Biren officiating. Burial will follow in Calvary Cemetery. Visitation will be at the church from 10 a.m. until time of services on Thursday. Please share your memories of Ray and view his online video when it becomes available at www.hofffuneral.com. A live stream video of the mass will be available at www.Redeemersaints.org. Memorials are preferred to a charity of the donors choice.