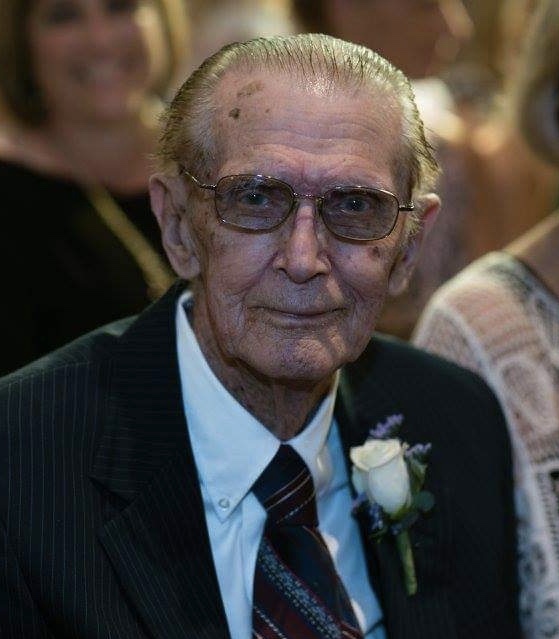 Orval Maynard Lea, 100, died at Rushford Good Shepherd Lutheran Home surrounded by family on December 9th, 2020.
Orval was born December 7th, 1920 to Oscar Theodore Lea and Mary (Mikkelson) , both from Fillmore County. Orval was raised on the Lea farm on "Pigtail" in Peterson, MN. All his ancestors were full-blooded Norwegians, and had the heavy accent to prove it.
Orval attended grade school at the Tolstad School on Pigtail. He had no siblings so his cousins were his playmates in early years. After finishing his education at the one-room schoolhouse on Pigtail, he worked on the family farm helping his father. His first paid job was hanging tobacco leaves high in a tobacco shed.
Orval met Alice Berekvam in 1942 and they were married June 17th, 1946 and lived in Rushford for several years. In their marriage they had four children that kept them very busy. As his children grew older he enjoyed playing cards and checkers with them. But, his greatest passion by far was sharing his love for music with his family.
Orval was a jack of all trades, he could fix or build almost anything. He worked as an auto mechanic in his early marriage in Rushford, later did farming, and enjoyed doing fine carpentry; building many beautiful pieces over the years. He built a home in Brooklyn in Rushford, where they resided until 1955, then they bought a farm on Pigtail near his parents farm. He worked many years as a carpenter, mostly in the Winona area. Later in life he built several beautiful electric mandolins and also cabinets, which revealed his superior handcraft work. His children and grandchildren will always cherish the handmade gifts he made for them.
In 1966 he sold the farm and after remodeling a small Winona home with a new addition, the family moved to Goodview to accommodate his work schedule and their oldest daughters' college years. During the late 1960's they bought a camper. They joined a camping club and enjoyed traveling to different locations with their friends. Especially enjoyable for them was a camping trip to Colorado. He was such an easy going person and made many good friends wherever he went.
In 1971 they moved back to Pigtail and took over his parent's farm. When they moved back to the family farm he spent many hours in the shop he built playing his fiddle, fixing things, or doing woodworking.
Later in their retirement Orval and Alice spent many winters in Texas where Orval would jam with musical friends. Alice, as always, was by his side supporting him as a good listener and dancing to his music. His favorite hobby was playing his fiddle, but he also played mandolin and guitar. He was self-taught and instilled the passion for music in his family. The oldest children remember the many jamming parties held at their home in Rushford. Orval would cut records of his music which also included a song sung by the oldest daughters when they were per-school age. Orval also shared his music at many area nursing homes when he was a member of the Granny Band.
Orval and Alice were resilient people. After moving from the farm to Rushford in their 80s, they were flooded out of their Brooklyn apartment. They lost almost everything in the flood, but for Orval losing his small collection of fiddles and musical tapes was devastating. His passion for fiddling was diminished after that experience, but they held each other up and continued to find joy in family and getting into their new apartment.
Orval was so sad when his children could not visit him the last ten months of his life due to the COVID pandemic, but he held out to his goal, his 100th birthday, partly because he knew his children would be allowed to visit and celebrate with him. He died only two days after his birthday surrounded by Alice and his children. He was deeply loved by his family and will always remain in our hearts.
The family would like to recognize the staff at Good Shepherd Lutheran Home who provided their compassionate care and kindness to Orval when it was most needed. You were amazing to both our Dad and the family during these difficult times. God bless all of you.
Orval is survived by his wife Alice of 74 years, his daughter Elaine Nordlie, daughter Barbara Kay (Craig Kay), son Gary Lea (Tara), and daughter Ronda Flattum (Lowell Flattum), 13 grandchildren, and 18 great grandchildren.
He is preceded in death by his father and mother, Oscar and Mary Lea, son-in-law Kjell O. Nordlie, granddaughter Christine Nordlie, and great granddaughter Emerson Barbaro.
Private family services will take place at a later date.
Please leave a memory of Orval and sign his online guestbook at www.hofffuneral.com