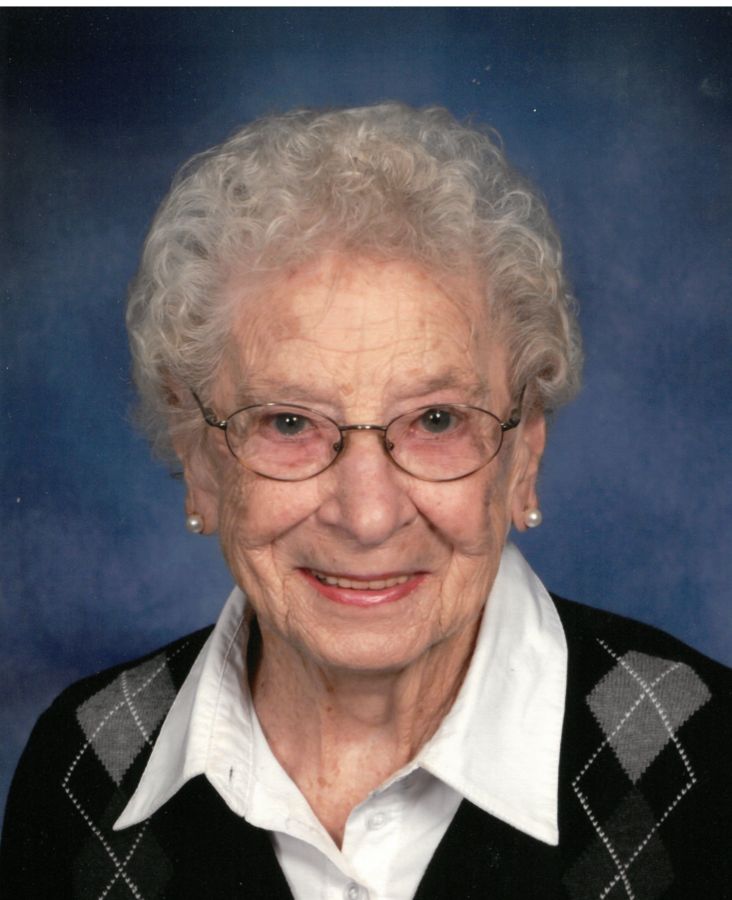 Myrtle Irene (Bunke) Otis, age 98 of Rushford, died peacefully surrounded by family at Mayo Clinic Franciscan Healthcare in La Crosse, WI on July 21, 2021. Myrtle was born on August 1, 1922; the daughter of Paul and Ragna (Boe) Bunke. She was united in marriage to Donald Otis on March 19, 1945. From this union, they would be blessed with four wonderful children, Sandy, Kay, Deb, and Bill. Myrtle grew up in the Rushford area, attending schools in Bratsburg, Highland Prairie, and Rushford. She lived on a farm in the Hart area and was an active 4-H member, winning numerous awards and at one point demonstrating bread making at the Minnesota State Fair.

She and her husband farmed in rural Rushford for a number of years and then the family moved to Houston, MN where she resided fifty plus years and retired as a bookkeeper for the Houston Money Creek Coop Creamery. Following retirement, winters were spent in the Texas Rio Grande Valley where the couple made many lifelong friends and enjoyed and participated in the music of the Valley.

Myrtle enjoyed many hobbies including gardening, handwork/crocheting, baking/cooking and canning as well as hunting and fishing. Myrtle was perhaps most famous as an accomplished bluegrass and old-time Scandinavian musician. She loved her mandolin and played it with gusto - the faster the better. Her repertoire of songs was, it seemed, endless. To share her music was sheer delight for her. She was a member of several
bands during her musical career, the last being; Family Four Plus Two, Cedar Valley Bluegrass Band and the "Myrtle Doves". She was a Charter Member of the Southeastern Minnesota Blue Grass Association and remained an active participant.

Myrtle will always be remembered as a courageous, gritty woman, small in stature and yet bigger than life. She built character daily as she role modeled love, acceptance, perseverance and resilience. It is with gratitude that she shared her life journey with all that knew her. She was a member of the Highland Prairie Lutheran Church, a past member of Cross of Christ Lutheran Church, Houston, MN and a Charter Member of St.
Mark's Lutheran Church, Rushford, MN.

A Funeral Service for Myrtle will be at 10:30 a.m. on Saturday, July 31, 2021 at the Highland Prairie Lutheran Church in Peterson, MN. Visitation will be held from 4 - 7 p.m. on Friday, July 30, 2021 at the Hoff Funeral Home in Rushford; as well as one hour prior to the service on Saturday at the church. Myrtle will be laid to rest by her husband in the Hart Lutheran Cemetery. In lieu of flowers, donations may be made to the Sandra J Schulze American Cancer Society Hope Lodge, 411 2nd St NW, Rochester, MN 55901 or your favorite charity. Please leave a memory of Myrtle and sign her online guestbook at www.hofffuneral.com. Hoff Funeral Home of Rushford is assisting the family.