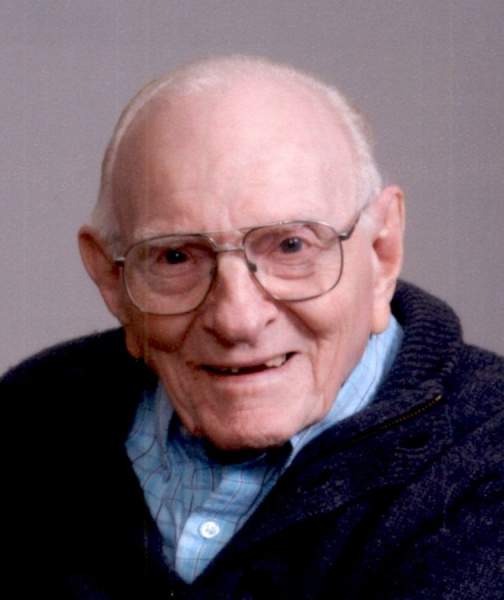 Myron "Mike" Erickson - Chatfield, MN
While many are sheltering in place at this time, Mike has found shelter with his Eternal Father in Heaven. He passed peacefully with family at his side on March 24, 2020 at the Chosen Valley Care Center.
Mike was born on February 13, 1923 to parents Peter and Alpha. He was raised on the family farm in Pilot Mound township. He attended country school and graduated from Chatfield High School in 1941. After graduation he spent summers working on local farms and his winters working at a packing plant in St. Paul for the war effort. In 1945, he enlisted in the US Navy and spent time in the Pacific. On March 19, 1950 he married Dolores "Tootie" Wentworth. The couple made their home in Chatfield, MN and together raised seven children.
When Mike returned from the Navy in 1948, he began his 38-year career in automotive parts. He was employed first at Chatfield Motor Company and then Clements Chevrolet in Rochester. To keep busy after retiring, he worked part time at the Chatfield Brass Band Lending Library and the Chatfield High School.
Mike was an active member of the Pilot Mound Lutheran Church and the Chatfield Lutheran Church. He was a Sunday School teacher, Confirmation teacher, and a Boy Scout Leader for Pack 43. Mike loved music. He was a charter member of the Chatfield Brass Band, playing trombone until the age of 90.
Mike's biggest joy was his family. He enjoyed fishing, church activities, rides in the country, coffee time with friends, tinkering around the house, Brass Band outings, and simply sitting on his porch visiting.
He is survived by his brother Phil (Helen) Erickson of Rochester. His seven children and thirteen grandchildren: Geri (Chuck) French, Jenn and Ben; Lana Bernard, Michael, Jamie, and Molly; John; Julie (Tom) Keefe, Tera and Meredith; Peter (Leanne), Paige and Jacob, all residing in Chatfield; Jeff (Terri) of Byron, MN, Jad and Cole; Joe (Caryn) of Fremont, NE, Callie and Kacia. Sixteen great-grandchildren, with two more on the way, one great-great grandchild, and several nieces and nephews.
He was proceeded in death by his loving wife of 52 years, his brothers, Arnold, Milton, Merlin and sister Arlene Rain. In-laws Art and Marion Wentworth, Bud Rain, Marion (Arnold) Erickson, and son-in-law, Clifford "Chip" Bernard.
Services will be at a later date, with respect to the COVID-19 restrictions. At this time please share a memory of Mike or a greeting to his family at www.hofffuneral.com. A video tribute will be available shortly as well. Hoff Funeral and Cremation Service is assisting Mike's family with services. Memorials are preferred to Chatfield Lutheran Church or Chatfield Brass Band. Memorials may be mailed to Hoff Funeral Service, P.O. Box 576, St. Charles, MN 55972.