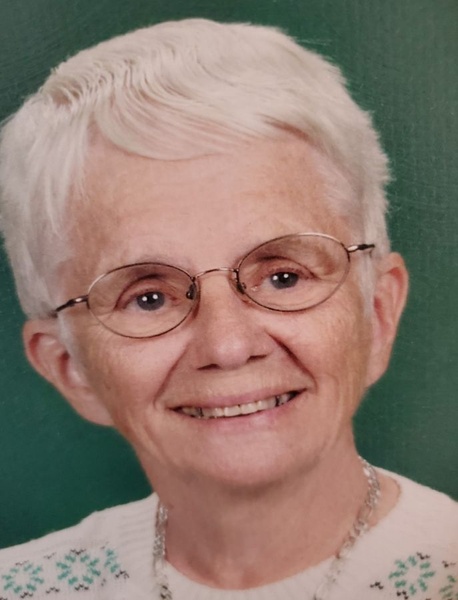 Muriel J. Holland, 92, of Rushford and formerly of Lanesboro, MN died on Thursday, April 30, 2020, at the Good Shepherd Lutheran Home in Rushford, MN.
Muriel was born on June 25, 1927, in Whalan, MN to Arthur R. and Minnie (Hongerholt) Johnson. She attended country school in Whalan. On January 2, 1947, she was united in marriage with Amos E. Holland in Peterson, MN. Following their marriage, Muriel and Amos lived in Calmer, IA. They then moved to the Lanesboro area where they farmed for many years. Muriel also worked candling eggs in Lanesboro for several years and later worked at Rush Products in Rushford for many years. She was a member of Arendahl Lutheran Church. One of her favorite life highlights was attending the Tupperware Jubilee during the opening of Disney World in Orlando, FL. Muriel thoroughly enjoyed shopping at rummage and garage sales. She was known to shop until she dropped.
She is survived by her four children: Allen (Nancy) Holland of Austin, MN; Larry Holland of Mabel, MN, Cheryl (Dennis) Kinney of Roseburg, OR, and Charolyn (Jim) Hanson of Nekoosa, WI; 15 grandchildren, 31 great-grandchildren, and 8 great-great-grandchildren; and by four siblings: Lavina Sveen, Everett Johnson, Dolly Hanson and Arlyn Johnson.
She was preceded in death by her parents; husband; and three sisters: Inez, Verna and Minerva.
There will be a memorial service for Muriel at 2:00 p.m. on Saturday, May 15, 2021 at Hoff Funeral and Cremation Service in Rushford with the Reverend Sarah Walker Brown officiating. Burial will be in the Arendahl Lutheran Cemetery in rural Peterson, MN.
Hoff Funeral and Cremation Services in Rushford is assisting the family with arrangements.
Please leave a memory and sign Muriel's guestbook at www.hofffuneral.com