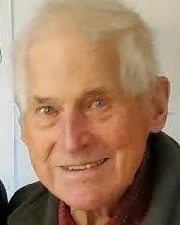 Merlin's Celebration of Life Service will be at 11am on Friday, October 14 and will be LIVESTREAMED at this link https://view.oneroomstreaming.com/authorise.php?k=1665444134212697
Merlin Sutter was born on Mother's Day May 9th, 1926 and died September 30, 2022 in his home surrounded by the loving care of his daughters.
He cherished his relationships as father, grandfather and great grandfather and felt blessed with family, friends and neighbors that greatly enriched him over the years.
Walking to and from the Town of Cross schoolhouse for elementary education, then sometimes living in town when the roads were impassable led to his graduation from Fountain City High School in 1944.  The Class of 44 was a tight friendship, sometimes having a class reunion every 2 years, one even hosted by him at the farm.
As a lifelong farmer, hunter, fisherman, farm products businessman, school board and Farm Bureau member, he believed in community service and service to the country.  One of his adventures in 1947 was a humanitarian 6-week trip to Poland by ship after WWII to deliver livestock to the devastated people.  It turned into 4 months when the ship became frozen in the bay.  He spoke about how well people treated them, having so little themselves.  They never went hungry.  From 1952-1954, he was in the US Army serving in Europe.
In 1957, he married Barbara Nuttelman from West Salem.  They later divorced.
He has daughters Julie, Laurie and Cheryl, grandchildren Michael, Meghan (Ryan), Kate and Kevin and great grandchildren Madelynn, Jackson, Abraham and Lucas.  He modeled love, faith in God, hard work, sacrifice and service to his family.  He felt blessed to see them carry on these values.
For 17 years in later life, he had special friend Marge Wolfe, her seven daughters and families.  After losing Marge, her daughters continued their special bond with him, and he was so appreciative.
Preceding him in death are his parents Stella (Schroeder) and Fred Sutter, infant brother Virgil, sister Lotus and her husband Jerry, brother Glen, sister-in-law Nancy and Marge Wolfe.
He is survived by his daughters, grandchildren and great grandchildren, brother Gerald Sutter, sister-in-law Claire Sutter Schamberger, many nieces, nephews and cousins, and the Wolfe girls.
Services will be privately held.  Pallbearers are grandsons Michael and Kevin, great grands Madelynn and Jackson, and Roger, Ron and Bob Tullius of whom he treasured.
In lieu of flowers, memorials are preferred to Gundersen Health System, St. Michael's Lutheran Sunday School and Cochrane-Fountain City School District for scholarships.
We wish to thank the Gundersen Health System, St. Croix Hospice, and St Michael's Lutheran Church.
Our family's heartfelt gratitude to the many friends, neighbors and extended families for your outpouring of love and support.  There are no words to tell you how very much this has meant to us.  Remember how much Dad loved you, as do we.
Hoff Funeral and Cremation Services of Winona/Goodview, MN is assisting the family with arrangements.  Please share a memory and sign the guest book at www.hofffuneral.com.