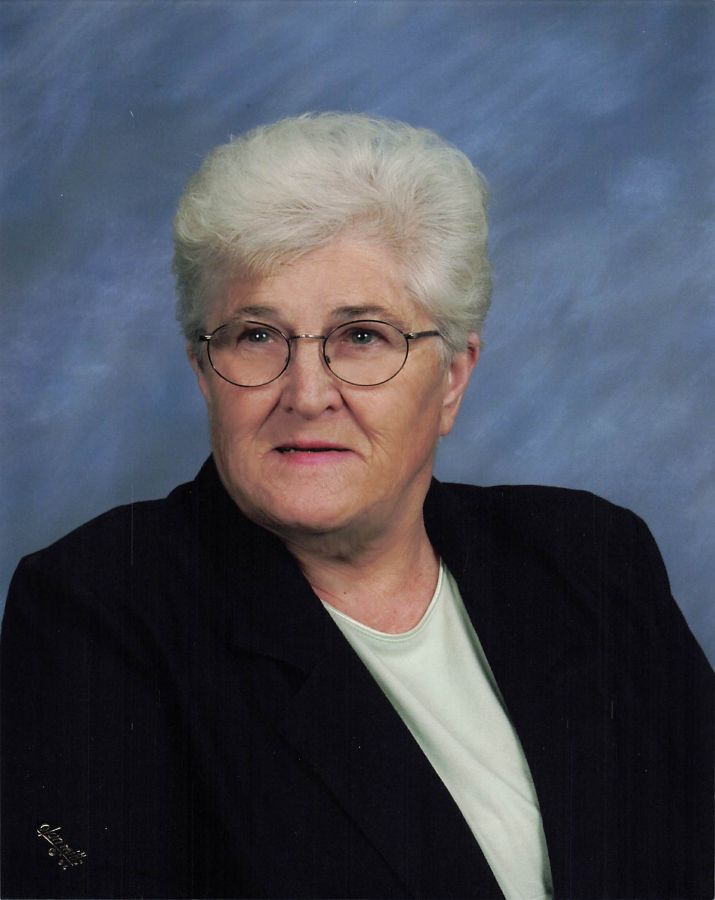 Marjorie (Margie) Hewitt of St. Charles, passed away on August 3, 2021 at Chosen Valley Care Center in Chatfield, MN, at 95 years and 10 months of age.
Marjorie Alice Selleck was born on September 30, 1925 at Winona General Hospital in Winona, Minnesota to Joseph R. and Caroline C. (Heim) Selleck. She grew up on a farm 7 miles northeast of St. Charles. Growing up on the farm, Margie learned to drive horses, milk cows, feed pigs and chickens and do whatever other chores needed to be done. The Selleck family belonged to St. Aloysius Catholic Church in Elba, MN where Margie was baptized, made her First Holy Communion and was confirmed.
Margie went to kindergarten at rural Oakview School and later attended school at Summit and Dublin rural schools. After finishing the 8th grade, she rode the school bus to high school in St. Charles. She graduated from St. Charles High School in 1943, 12th in her class of 40 students. After graduation, she traveled to California where she worked in a Conservation Office for the summer. After returning to Minnesota, Margie worked at the Watkins Company in Winona and then as a bookkeeper for the Lewiston Co-operative for 7 years.
On November 11, 1950, Marjorie and James Henry Hewitt of St. Charles were married at Lewiston, MN. The couple lived in Lewiston until September of 1951 and then briefly in rural LaCrescent. In 1952, they moved to St. Charles where they purchased what would be the Hewitt family home in St. Charles for the next 67 years. Margie and James had 7 children and she was a stay-at-home mom until the youngest went to school. In 1971, Margie went to work at North Star Foods in St. Charles. In 1978, she was hired as a clerk/typist for the City Clerk and Public Utilities office for the City of St. Charles, retiring in 1988. James was the Chief of Police for the City of St. Charles for 25 years. James, Margie's best friend and high school love, died on April 18, 1999.
Margie has been a member of St. Charles Borromeo Catholic Church in St. Charles since 1952. In her spare time, Margie enjoyed embroidery of pillowcases and tablecloths, sewing, making quilts, tending her flower beds, baking, working crossword puzzles every day and was an avid reader. She was an election judge, served on the St. Charles Public Library Board and was a member of the Selleck Researcher's Association. Both she and James volunteered for Meals
On-Wheels. She greatly enjoyed travel, bus tours and family gatherings.
Margie is survived by her children: Kathryn (Gary) Feine of Preston, Loren (Deb) of Rochester, Luanne (Scott) Hoeft of St. Charles, Jan (Antonio) Planells of Rochester, Robert (Barb) of Rochester, Joseph (Renee) of St. Charles and Jason (Jennifer) of Anamosa, lowa. She is also survived by 11 grandchildren (Lucas, Caleb, Shane, Spencer, Carissa, Molly, Elizabeth, Heather, Dillon, Mitchell and Logan), 12 great-grandchildren, her sister, Ruth Selleck Lamke and many, many nieces, nephews and cousins. She was preceded in death by her husband, her parents, an infant grandson, her sisters, Mary Selleck McGee, Joanne Selleck Steinhoff, and brothers-in-law, A.R. McGee, Thomas Steinhoff and Jim Lamke, mother-in-law Florence Hewitt and father-in-law Henry Hewitt.
The Hewitt Family extends very special thanks to Pat, Mary, Rachel, Maria, Maricella, Rosie, Chris, Tricia and Ashlyn, her wonderful, kind and loving caregivers who made it possible for her to stay in her home as long she could. You are angels! Also, many thanks to the staffs of Seasons Hospice and Chosen Valley Care Center for the kindness, care and support we received for Mom and for our family as well. We will be forever grateful to all of you!
A Funeral Mass will be held on Saturday, August 7 at 11:00AM at St. Charles Borromeo Church. Visitation for family and friends will be held at the church beginning at 10:00AM until the time of Mass. Burial at Hillside Cemetery in St. Charles will take place at a later date. The Hoff Funeral Home of St. Charles is assisting Margie's family with arrangements.
In lieu of flowers, memorial donations are preferred to Seasons Hospice, the SCHS Scholarship Fund, or the St. Charles Borromeo Church.