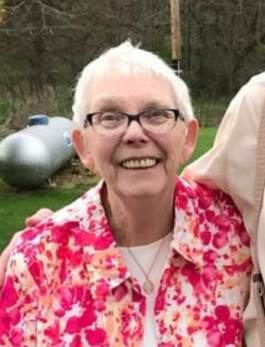 Marilyn (Wamhoff) Volkman, 84 of Kasson and formerly of Lewiston, passed away on Monday, June 15, 2020 at Mayo Clinic Hospital, St. Mary's Campus after a brief illness.
She was born August 27, 1935 in Winona to William and Vera (Markwardt) Wamhoff. Marilyn graduated from Winona High and began working at Watkins until she met and married the love of her life, Donald, on July 30, 1960. They moved to the "Arches," outside of Lewiston in 1970 to raise their four children. They moved to Kasson, MN in 2017 to live with Lori, Glen and Noah Thesing. Marilyn worked at Camera Art for 20 years before retiring in 1999.
She loved to read, enjoyed Bingo, going to the casino, bowling, traveling, and spending time with family and friends. Marilyn had a strong faith and was a member of St. Martin's Lutheran Church in Winona.
She is survived by her husband of almost 60 years, Donald; four children, Robert (Judy) of Beaver Dam, WI, Tammie (Gary Rossin) Volkman of Dover, MN, Lori (Glen) Thesing of Kasson, MN and Dan (Betsy Beech) of Altura, MN; two grandchildren, Cole Volkman Hall and Noah Thesing; one step-granddaughter, Haley (Leon) Evans of Beaver Dam, WI; two sisters-in-law, Pat Barnum of Pine River, MN and Margaret Wamhoff of Upper Michigan; and mother-in-law, Florence Ronnenberg of Pine River, MN.
Marilyn was preceded in death by her parents; sister, Elaine (Clarence) Block; brother, Gene Wamhoff and step-granddaughter, Megan Creed.
Funeral Service will be 11 a.m., Saturday, June 20, 2020 at St. Martin's Lutheran Church in Winona with the Reverend Richard A. Moore officiating. Visitation will be 10 a.m., until the time of the service. Burial will follow at Oakland Cemetery in Minnesota City.
Hoff Celebration of Life Center is assisting the family with arrangements. Please share a memory of Marilyn and sign her online guestbook at www.hofffuneral.com.