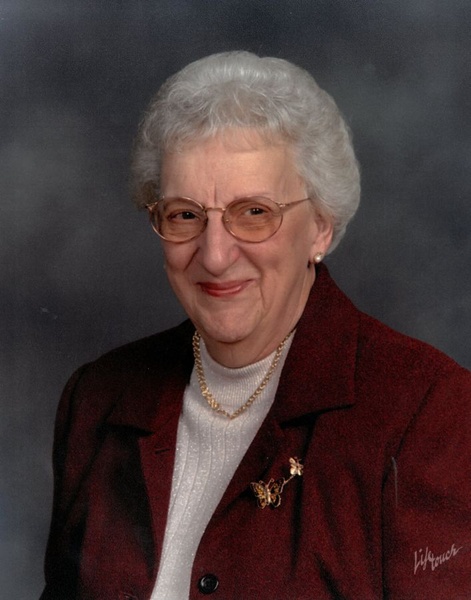 A woman who was filled with faith, love and gratitude and willingly shared it with those around her, Marian Miller was a devoted and loving wife, mother, grandmother and friend to all who knew her. She knew the value of hard work and could make a dollar stretch to its utmost capacity. With seven children in tow, Marian juggled tending to her household and looking after her children in addition to serving others with a giving and faithful heart. She always placed the needs of others before her own and possessed a quiet resolve while never hesitating to appreciate the beauty around her. Most importantly, Marian was a loving, faith-filled influence to those she leaves behind.

As the Roaring Twenties brought much zeal to city slickers, Henry Ford introduced the first ever, forty-hour work week. Another first was the first public demonstration of the television at a time when Winnie the Pooh was published to the delight of readers everywhere. It was during this time in the riverfront city of Wabasha, Minnesota, when on September 13, 1926, John and Mary (Tushaus) Meyer welcomed the birth of their baby girl, Marian, into their hearts and home.

Marian grew up with her three younger brothers, Leo, Lawrence, and Vince along with her beloved canine companion, a Rat Terrier named Buster. She first attended school in Kellogg and finished her country schooling in Conception after the 8th grade. She then decided to purchase an accordion for $1.50 and taught herself how to play, not realizing this would be something she would continue to enjoy well into her later years. As a young woman, she continued to enjoy music and loved attending the area dances where her father always made sure Marian kept a close eye on her younger brothers to keep them out of trouble!

Marian's first job was as a nanny, and she continued this profession for 4 years until she began working in the maternity ward at St. Elizabeth's Hospital in Wabasha, Minnesota. She knew Fred Miller (whom she later affectionately called "Freddie") from growing up in Conception but came to know the true meaning of love while writing back and forth with Fred while he was in the service. Although deeply in love, the Korean War was underway, and Marian insisted on waiting to marry Fred until he was out of the military. The happiest day of her life was October 16, 1952, when they were finally joined in marriage. Following their marriage, Marian and Fred moved to Wisconsin to work on a farm, and then in 1955 they moved to Plainview, Minnesota, where they raised their seven children.

As a family, they enjoyed many family camping trips as well as numerous fishing adventures. Some of their camping excursions included taking their pop-up camper to South Dakota and they often camped at Whippoorwill Campground. Marian also continued her love of playing the accordion throughout her life. She played a smaller, push-button accordion and often played alongside her husband who took to the larger, Lawrence Welk style keyboard accordion. Marian's children, grandchildren and great-grandchildren hold special memories of her playing the accordion, especially at their many family gatherings which she so loved.

Marian's oldest child, Marilyn, was married in September 1972, and sadly, Fred passed away unexpectedly on November 15, 1972, at the age of 43. Left to raise the six children still at home, Marian's resolve and perseverance was made evident. Faced with much uncertainty, she lovingly gathered her children in a big group hug and told them "If we stick together, we will get through this," and they did.

With the value of family pressed upon her children, Marian taught her children to do their part in helping to sustain their household. Marian's love of gardening brought her great joy while also helping provide for them in countless ways. Her beautiful flowerbeds were enjoyed by many, and when the berries were ready for picking she had the children gather them to sell to neighbors. Even when Fred was alive, it was always a big day when he said, "pick the berries and we'll go to a movie!" The whole family helped can foods from the garden such as beets, corn, and beans along with peaches, chicken and beef. It was one memorable day in their kitchen when a jar of beets did not seal properly, blowing the lid and contents everywhere! In addition to making ends meet by canning foods, it became a yearly event for the children to prepare for school in the fall with Marian laying out all their clothes to see which child was able to wear what; thus claiming their wardrobe. If items no longer fit any of the children, they were always used for creating either family quilts or rag rugs.

Following Fred's tragic death, Marian continued to enjoy camping trips with the children, knowing the importance of family time. While camping, Marian would often remind them not to touch the roof of the camper during rainstorms because it was sure to leak; they always seemed to prove her theory to be correct!

A wonderful cook and baker, Marian's family has fond memories of the delicious smell of baked goods. Marian's favorite always included her love of milk gravy over toast. Sunday dinners were set with the good dishes, and it was a special day as Marian would often invite aunts and uncles to join them. She had a knack for knowing just who needed an invite. All were welcome at Marian's table and to her home. In fact, different family members lived with them for short periods of time including Grandma Meyer who lived with them for several years.

Always a giving woman, Marian never complained, and her patience was never ending. However, her neighbor and close friend, Annie Pierce, knew when Marian needed to get in the car and get away for a few hours and was more than willing to help. Yet in the best of Marian's own words, "It is what it is," and she carried on.

While her children were growing up, Marian worked part-time at Piper Hills Golf Club as a cook. Later, she went to work at the Plainview School and then Hillcrest Care Center until retiring. In retirement, she delivered Meals on Wheels and provided care to those in need. She also volunteered for the church funeral lunch committee. She was an active member of St. Joachim Catholic Church and the Catholic Daughters in Plainview. Through the years, Marian always relied on the strength of her faith to get her through life's challenges.

A thankful woman, Marian always thanked those around her with a polite "thank you" right up to her final days. Other memorable sayings that will be held close include "Too thick, don't stick" and "You'll have everything figured out when your fingers are the same length!" In all ways, Marian did "the best she could with what she had at the time" and through it all, "we all stuck together." Deeply missed, Marian will be fondly remembered as a treasure in the hearts of many.

The Funeral Mass will be at 1 p.m. Saturday, January 16, 2021, at St. Charles Borromeo Catholic Church in St. Charles with the Reverend Tim Biren officiating. Burial service will follow at St. Joachim Cemetery in Plainview. Visitation will be from noon until the time of the funeral service, Saturday, at the church. Grandchildren will be pallbearers. Please share a memory of Marian at her online guestbook and view her video when it becomes available at www.hofffuneral.com. If you are not able to attend the service in person, you can access the live stream link via the Hoff Funeral Home website.