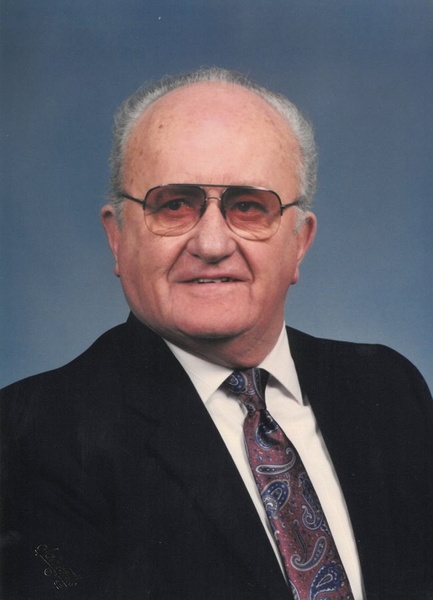 LuVerne Louis Majerus, 94 of St. Charles, died Saturday, April 18, 2020 at Whitewater Health Services. LuVerne was born to Louis and Gertrude (Hayertz) Majerus on July 14, 1925 in Altura, MN. He attended first through eighth grade in the Altura Public School. In 1938, the family moved to Elba where he then attended St. Charles Public School and graduated in 1943. He then joined the U.S. Navy and was aboard the U.S.S. Bergen stationed off the coast of China during WWII. After being discharged from the Navy, he purchased the Standard Oil Company franchise and the Greyhound Bus Line Depot in St. Charles which he operated for twenty-seven years. He also was a school bus driver for St. Charles School District for thirty years before retiring. LuVerne was a dedicated St. Charles volunteer fireman for 20 years.
On June 14, 1947, LuVerne was united in marriage with Jean Marie Mauer of Elba at the St. Aloysuis Catholic Church.
Survivors are his son, Glen Louis; daughter-in-law, Renee (Miller); two grandchildren, Landon John and Marshal Louis all of St. Charles; brother-in-law, Robert Mauer; sisters-in-law, Lavonne Majerus and Vicki Majerus; and many nieces and nephews.
LuVerne was preceded in death by his wife, parents, siblings, Merle Haack, Wes Majerus, David Majerus, and Darlene Majerus; and grandson, Steven.
A private Mass of Christian Burial will be held at St. Charles Borromeo Catholic Church with Reverend Tim Biren officiating. A public visitation and service will be at a later date. LuVerne will be laid to rest in St. Aloysuis Cemetery. In lieu of flowers donations can be made to the St. Charles Academic Scholarship Fund. Cards may be mailed to Hoff Funeral Home, P.O. Box 576, St. Charles, MN 55972. Please leave a memory of LuVerne and sign his online guestbook at www.hofffuneral.com. Hoff Funeral Home, St. Charles, is assisting the family.