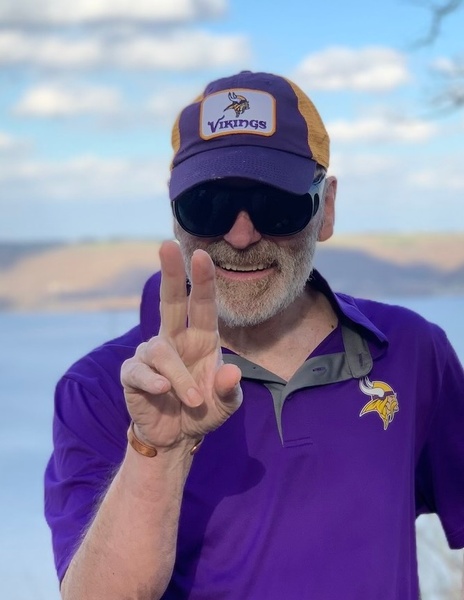 Luther "Lute" Paul Ulrich, 67, of Winona, MN, passed away peacefully, surrounded by his family on August 7, 2021, after a courageous and lengthy battle with Progressive Supranuclear Palsy (PSP).

Lute was born in La Crosse, Wisc. on October 9, 1953, to Roger and Lois (Eide). He attended Lanesboro High School and went on to Rochester Community Technical College (RCTC) and then to University of Wisconsin-River Falls, where he graduated with a Bachelor of Science in Agricultural Sciences.

At RCTC, Lute had an exceptional football career. He was the leading yard rusher in the nation and while there, was recruited to play at top football schools like Notre Dame; and even had NFL scouts looking at him. He was a lifelong Minnesota sports fan and never gave up on his Vikings and Twins, even when they barely won any games.

He was co-owner and operator of Benson Farm Service in Lewiston, Minn. for 35 years before retiring in 2011. He loved seeing every one of his customers walk through the door and knew everyone. He was, in every aspect of his job, a people person. He became a pillar of the farming and local community during his time at Benson Farm Service. One of his greatest accomplishments was participating in Lewiston's annual Fools Five Road Race, a road race benefiting cancer research. He was only 1 of 7 who participated every single year for 41 years since it started in 1979. There is no doubt Lute would be at the start line of this year's Fools Five Race, which is to be held in October.

Lute was a kind and generous man. He never had a bad word to say about anyone, and his compassion for others will be sorely missed. He loved being outdoors, especially on his 150-acre farm, where he would spend hours in the woods, often just enjoying the peacefulness that nature had to offer. He loved fishing and would annually travel to Canada where he caught many fish. He loved deer hunting and would look forward to the time he would get to spend with his friends outside. His John Deere tractors were prized possessions, where he would spend hours outside mowing and meticulously looking after his property. His 3 kids meant so much to him; he was a loving father who had every single one of their backs. He loved his 3 Welsh Corgis: Bentley, Libby and Halle, and his family is comforted that he is now reunited with all 3 of them.

Lute was the stoic trooper. He never complained once of his diagnosis, and often apologized to others for having the disease. While his journey with the disease was long, he touched every single person he met along the way, from caregivers to nurses to doctors to complete strangers. His smile lit up the room, and he loved giving firm handshakes and big hugs (especially to the ladies!) He loved thumb wrestling with everyone (he always won) and binging Netflix. Two of his children, Nick and Emily, were lucky enough to move in with him and spent the last year with Lute. While staying with him, they shared many nights together on the deck listening to Van Morrison and playing with Lute's golf putting mat. That turned into the idea of Lut Putt 2020, a mini golf open themed party they had for his 67th party, with all proceeds benefiting Cure PSP. It was the perfect celebration for a perfect man. They shared many laughs, holidays, and adventures together, for which they will be eternally grateful for.

Preceded in death by his father, Roger and his brother, David.

The family would like to give a special thank you to his team of care workers, whom Lute loved so dearly: Jennifer Scheck, Lauren Weber, Vickie Blong and Michelle Stark. They would like to give an extra shoutout to Heather Kimmerle, dad's nurse. Dad waited every week for Heather to visit (tapping his watch) and loved giving Heather hugs.

The outpouring of support and love Lute's family have felt from everyone around them does not go unnoticed. In lieu of flowers, the family asks donations be made in Lute's honor to Cure PSP (www.curepsp.org/donate).

A celebration of his life will be 11 a.m., Friday, August 13, 2021 at Hoff Celebration of Life Center - Goodview, led by Funeral Celebrant Jenny Hoff. Visitation will be 5:30 - 8 p.m., Thursday and one hour prior to the service. If you have a Lut Putt shirt, please wear it. The service will be livestreamed at the following link: https://view.oneroomstreaming.com/authorise.php?k=1628803132130523
Hoff Celebration of Life Center - Goodview is assisting the family with arrangements.