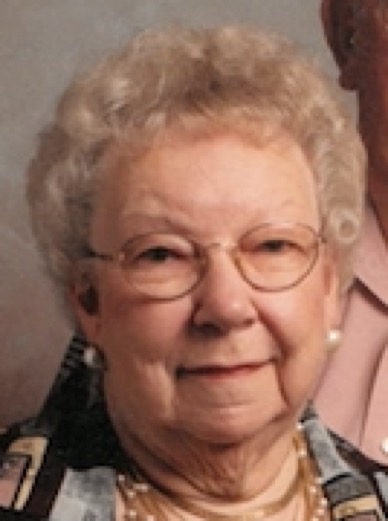 Lorraine Alvena Orr, 95, of St Anne's floor 5 in Winona, peacefully stepped into heaven to be with her family on May 12, 2020. Lorraine was born to Clarence and Clara (Paulson) Palmquist in Houston, MN on Oct 29, 1924. Lorraine married Robert Brown - with whom she had 2 sons. They were later divorced. Lorraine married Donald Orr on March 1, 1950. They lived in various small towns in Houston County. In 1958 they moved to Winona. They had 4 children. Lorraine worked at Lourdes Hall as a hostess. She later worked at Lake Center Industries until retiring in 1990. She enjoyed painting ceramics for family and friends. She loved traveling, dancing, going to the casino and playing cards until 2 or 3 A.M. many times. Lorraine was very much a people person. At 91 she was still doing yard work. She lived in her home until the fall of 2017. She is survived by son, Pastor Wayne (Patricia) Brown of Fort Collins, CO; two daughters, Nancy Frankum of Winona and Sharon (Peter) Woyczik of Trempealeau WI; 16 Grandchildren 27 G. Grandchildren and 24 GG Grandchildren; and Robert Michael Brown whom she loved like a son. Lorraine was preceded in death by her husband Donald in 2002; 3 sons - Dennis Brown, Gale Orr, and Rick Orr; Daughter, Sandy Brown; son-in-law David Brown; grandchildren, Mary Brown, Kevin Frankum and Joshua Orr; G Grandchildren, Jackie Brown and Meadow Brown; her parents, 2 brothers Alvin and Maynard Palmquist; Mother-in-law, Florence Northrup Father-in-law Norman Orr; 8 Sisters-in-law; and 9 Brothers in- law.
Due to guidelines of Covid-19 Pandemic - there will be a private graveside service.
To order memorial trees or send flowers to the family in memory of Lorraine Orr, please visit our flower store.