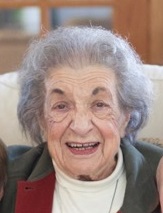 Lorraine E. Rippel, 96, of Winona and formerly of Bloomington, MN, died Monday, October 7, 2019 at Lake Winona Manor surrounded by her family.
Lorraine was born February 12, 1923 in Kimball, MN, to William and Helen (Fallert) Russenberger. She graduated from Tri-Mont High School in 1940. On October 27, 1943, Lorraine married her high school sweetheart, James Rippel. Following his discharge from the Army, they lived in Peterson, MN, eventually moving to Bloomington where they raised their family. Following Jim's death 14 years ago, she moved to Winona to live with her daughter.
Lorraine and Jim were very much in love; they enjoyed an active social life including dancing, Big Bands, spending time with close friends, and traveling. She was a devoted wife and mother and a loving grandmother and great-grandmother. Her family was always her priority.
Lorraine is survived by her daughter, Diane (Jim) McCready of Winona; son, Rollin (Sandy) Rippel of Northfield; grandchildren, Megan (John Rasmussen) McCready of Minneapolis, Jenna (Joe) Pellowski of Minnesota City, Heather (Ben) Leahy of Minneapolis and Josh Fredrickson of Crystal; great-grandchildren, James Rasmussen and Jake & Joey Pellowski; sister, Lois Hartke of Fairmont and sister-in-law, Mary Kriewall of Blue Earth.
Lorraine was preceded in death by her husband, Jim; son, Larry Rippel; infant daughter Wendy Rippel; and a brother, Edwin Russenberger.
A Celebration of her Life will be 11 a.m., Friday, October 18, 2019 at Hoff Celebration of Life Center - Goodview with the Reverend Joe McConkey officiating. Visitation will be 10 a.m. until the time of the service. She will be laid to rest at Fort Snelling National Cemetery.
Please share a memory of Lorraine, sign her online guestbook and view her video tribute when it becomes available at www.hofffuneral.com.