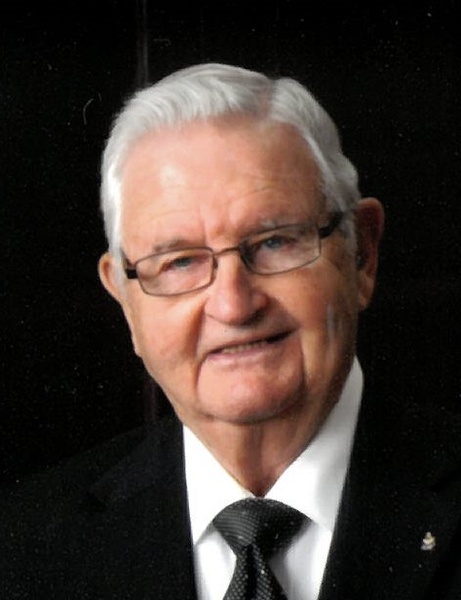 A Live Stream for Link's funeral will be available at the following link. https://view.oneroomstreaming.com/authorise.php?k=1627499421127703

John Lincoln "Link" Henry of Dover, and most recently a resident at Shorewood Sr. Campus in Rochester, passed July 26, 2021.
Lincoln was born May 24, 1925, the youngest of five siblings to James and Carrie (Hamilton) Henry of Dover, Mn. Link attended the Dover school system and went to Agricultural school at the University of Mn. campus. In 1944 he began farming with his brother Burton (Bud) Henry. On June 9, 1945, Lincoln married Geraldine (Jerry) De Puy of Plainview Mn. and they were blessed with six children.
Lincoln purchased a dairy farm in 1956 and continued to share farm equipment with his brother. He had one of the top dairy herds in Olmsted County. Link also raised hogs in a slated floor confinement building, one of the first in the area.
In 1980 Link and Jerry moved to the village of Dover and he continued selling Moorman feed products and De Kalb seed for several years. Link was a director of the Olmsted County Production Credit Association and Rochester Milk Producers Association. He was a 69 yr. member of the Rising Son Masonic Lodge #49, a Shriner, the St. Charles Moose Lodge, and the Dover United Methodist Church.
On January 30, 2010, after 65 years of marriage, Jerry passed. It was in October 2014 he moved to Meadow Lakes Sr living and February of 2020 to Shorewood Sr. campus.
Link enjoyed meeting and talking to everyone, attending family gatherings, visiting on the phone with family and friends, viewing photos on his IPad, and watching sports and politics! Never would he resist a drive back to Dover to check things out as it was always home. He took great pride in Dover and contributed to its growth. One of his biggest joys in the last few years was taking an apple or two to "Cash" a horse he raised. Cash had two owners since Dad owned him, yet on a drive one day he spotted him, called his name and they became reacquainted!
Lincoln is survived by his son Jeff (Kathie) Henry of Stillwater, daughters Jane (Dave) Ihrke of Owatonna, Jennifer (Mark/Bruno) Brannan of Kasson and daughter-in-law Karen Henry of Dover and many Grand and Great Grandchildren, and one Great, Great Grandson.
He was preceded in death by his wife Jerry, infant son James Michael, adult sons Jay B. and Jack Henry, parents James and Carrie Henry, brother Burton (Ivene) Henry and sisters Evelyn (Lloyd) Lenn, Charlotte (Keith) Dickerson, Beverly (Robert) Gill, and sister in-law Joyce (Joseph) Markus.
We would like to thank family and friends who stopped by to visit while at Meadow Lakes and Shorewood. Dad would never fail to mention "I had a visitor today!" Our appreciation too for his friends at Meadow Lakes and Shorewood Sr. Living. What a great family you became. Wonderful people and he appreciated you!
Thank you Dr Furst for your professional and personal care and, also for the care received at Seasons Hospice.
A Remembrance of Link's life will be 11 a.m. Friday, July 30, 2021 at Hoff Funeral Service in St. Charles, led my funeral celebrant Dianne Rislow. A visitation will be from 4-7 p.m. Thursday and 10- 11 a.m. Friday at the funeral home. Burial at Evergreen Cemetery in Dover and celebration of life at St. Charles Moose Lodge. Please share a memory of Link and view his video tribute, when it becomes available at www.hofffuneral.com.
In lieu of flowers memorials preferred to the Dover City Park, Dover Evergreen Cemetery or donor's choice.