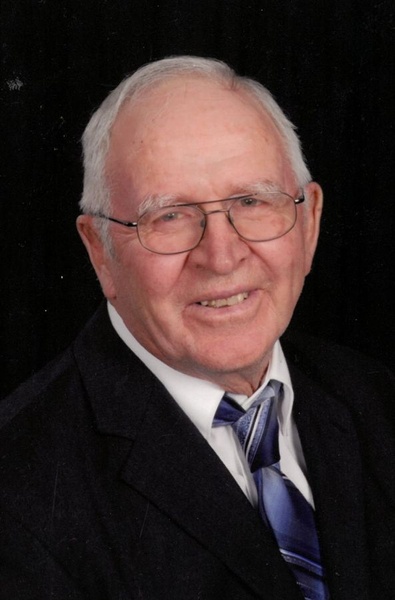 Leland R. Ferden, 92, of St. Charles, died on Sunday, November 21, 2021 at his home with family by his side. Leland was born September 5, 1929 in Saratoga Township to Gilbert and Ida (Limberg) Ferden and graduated from St. Charles High School in 1948. Jeanne and Leland Ferden were married October 26, 1950 in St. Charles. In the early years of their marriage the couple farmed near Troy. In 1955 they moved to Glenmoor Farms, south of Utica, and went on to raise their seven children.
Leland was a member of the St. Charles Borromeo Catholic Church. He received the Bishop's Award for service to the church. Leland was active in the Men's group where he assisted to develop a scholarship funded through calendar sales. Leland was a member of the Winona County Farm Bureau and the Old Settlers. Leland and Jeanne were recognized as the Winona County Outstanding Farmers. He was a member of the MN Brown Swiss Association where he served as the MN State Sale Chairperson through 2019. Leland was proud of their Brown Swiss dairy herd. Leland was known for the beautiful flowers that he raised each year. He was awarded Best of Show at the Winona County Fair competitions. In 1995, he was inducted into the Winona County Hall of Fame. In 2021, Leland received the Outstanding Senior for his volunteer work.
Survivors include his children; Richard (Marlis) Ferden of Utica, Mary (Phil) Schneider of Sheldon, WI, Kevin (Dorothy) Ferden of Minnesota City, Larry Ferden of Elgin, Deb (John) Rowekamp of Rochester, Margaret Davis (Paul Rudrud) of Rochester, and Doug (Karin) Ferden of St. Charles, 24 grandchildren, 26 great-grandchildren and a sister-in-law Marlene Ploetz of St. Charles. He was preceded in death by his wife Jeanne, a granddaughter, Katie Ferden and five sisters Marian Wiskow, Inga Ferden, Bernice Harrison, Irene Ferden and Gladys Sorenson and one brother Gerhard Ferden.
A Funeral Mass will be at 11 am on Saturday, November 27th at St. Charles Borromeo Catholic Church with the Reverend Tim Biren officiating. Burial will follow in Calvary Cemetery. A visitation will be at the church on Friday, from 4-7 and Saturday, one hour before services. In In lieu of flowers, donations may be made to the St. Charles Borromeo Men's Club Scholarship Fund. Please share a memory of Leland at his online guestbook and view his video tribute when it becomes available at www.hofffuneral.com. Hoff Funeral Service of St. Charles is assisting the family with arrangements.