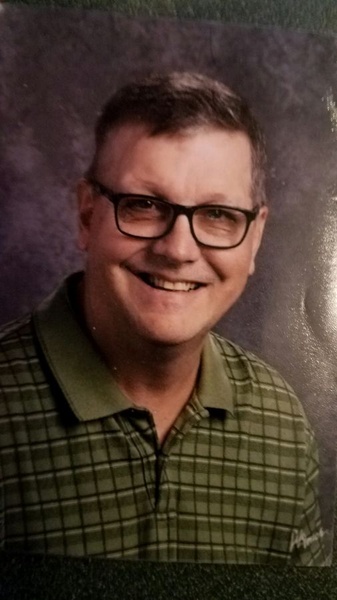 Kris Edward Hall, 58, of Winona, MN, died peacefully next to his love on Friday, November 8, 2019. Kris battled brain cancer for 25 years, beating the odds time and time again, only to pass the torch on to the Mayo Clinic to continue his legacy. He spent his last moments next to those that loved him more than he could imagine - or would ever believe.
From the beginning, Jean and Curt Hall had their hands full, and Kris (number three of five) helped make sure they kept busy. Between Kris' early on days of football, rough play and Army National Guard Service, nary a dull moment in the Hall house. Only when he succeeded to Bemidji State University to get his teaching degree did he let his mother rest.
While enjoying his days in college, he stumbled upon his true love - and ultimate challenge, Marsha. After many miles, many hours on the phone and finally a diploma; Kris proposed to Marsha in the toy room of the 'Big House' while playing restaurant with her three kids. He never realized how much his life would change.
Kris spent hours in the gymnasium and around the baseball diamond - coaching, cheering or signaling for a bunt. You could find him dabbling in woodworking, his best trait - making memories, or treasures for MarLa's. Time after time he was known to be at one of his kids' house fixing something, putting a deck on, making steps, fixing a water heater - you name it. A jack of all trades and the only man we knew that 'was actually smarter than a fifth grader' and 'should have been on Jeopardy'.
Known around town as Mr. Hall, he never forgot a face or a classroom experience. He lived for stories of his students and fellow co-workers.
His devotion to Marsha was like no other. Best friends does not describe their relationship - they were co-workers, builders, buddies, partners in crime, and the best time you could ever find. Often times you found them traveling the countryside looking for riches, having a 'burger' at a local watering hole, or jetting off to Vegas.
Kris is survived by his wife Marsha, of Winona, MN, four daughters and one son, Jennifer (Todd) Backer-Johnson of Chatfield, MN, Alison (Ryan) Prodzinski of Winona, MN, Laura (Seth) Strobush of Wabasha, MN, Kayla Hall of Lake City, MN, and Ryan Hall of Rochester, MN. He also leaves behind his treasured grandchildren Chance, Ethan, Sam, Callen, Carson, Madelynn, and Max. He is also survived by his parents, Curt and Jean Hall of Lanesboro, MN, and brothers - Mark, Andy and Cory. He is preceded in death by his grandson, Caleb Strobush, and best friend and brother, Eric Hall.
Kris was sent to Marsha as a gift, and aided raising four crazy girls and one silly boy. His life's work was just that - and once all the kids were raised, his body was spent and ready for the next chapter. He will forever be remembered for his laughter, his numerous movie quotes, his song lyrics, and his love. He will be missed by so many, and will forever be - Our Legend.
A celebration of Kris' life will be 5 p.m., Tuesday, November 12, 2019 at Hoff Celebration of Life Center led by Reverend Kerry Eversole. Visitation will be from 3 p.m., until the time of the service. Kris' body will continue the fight with brain cancer, as he donated his body to Science. He was forever a giver - and will always be in our hearts - our Grampa Kris.
Please share a memory of Kris, sign his online guestbook and view his video tribute when it becomes available at www.hofffuneral.com.