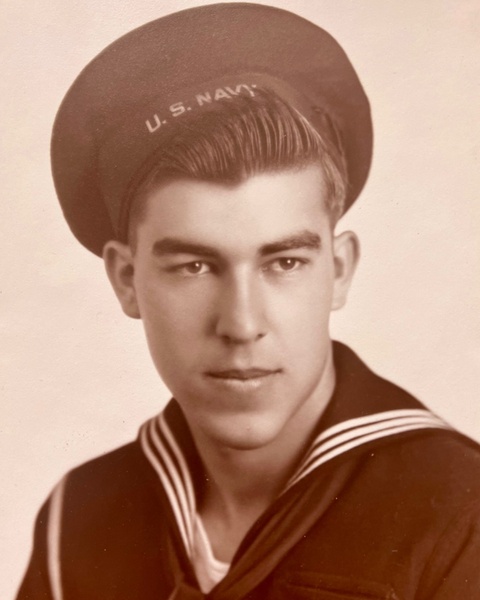 Joe was the last departed of the six children of Julius Louis & Maggie Wise. He has joined the love of his lifetime, Shirley Ann (Rietz) Wise and his family in heaven now.

Joe was a child of “The Greatest Generation.” Pre WW2 years he worked both family farms on the hill and in the valley in Rollingstone Township that were lost during the depression. His childhood consisted of working the family farm and cutting wood with his brothers to help pay for food. Pre -War at age 10 worked for Father Tibesar for a nickel a day to care for the exotic farm animals on the Parish preserve behind the school next to the spring ponds. He earned 25 cents a week and gave it to mom -Maggie, to help pay for groceries. He was allowed 5 cents to spend at the weekend Downtown Sassafras’s Merchantile for ice cream, popcorn and a movie.

As a teenager he enlisted in US Navy in January of 1945 and proudly served on the USS Leary DDR 879. Radio call sign “ Home Run”. Longest serving gearing class destroyer in Naval History(1945-1973). Participation Pacific Fleet Naval quarantine-at Kure, Japan.  He was awarded the World War II Victory Medal. Participated in the  “Navy Day” Parade on the Potomac in New York City in October of 1945 honoring the US Naval Victory over Japan with 47 of the Warships of the Pacific Fleet. This event was also attended by US President, Harry S. Truman. He was the manager and a player for the Pacific Fleet baseball team. They would go on to be the Chelsea Naval Base Pacific Fleet baseball Champions 1945-46.

Joe was a member of the 1951 and 1953 Minnesota Amateur Baseball State Champions – Rollingstone Merchants.

In May of 1953 he took a Catholic Winona Cotter High School girl, Shirley Ann Rietz to the Rollingstone Spring Baseball Banquet. Shirley became the Love of his Life for the next 54 years until her passing from Cancer in July 2008. They were married on June 19, 1954 at Holy Trinity Catholic Church.

They were blessed with seven children. Debbie preceded her parents to heaven.

With the assistance of the Federal GI Loan, Joe built his own basement home in Rollingstone for under $6,000.00. He worked 43 years in the cabinetry industry for Kruger’s Plastic Tops and Formica in Rochester, Minnesota.

Joe especially loved spending weekends with family camping at Prairie Island and Merrick Park on the Mississippi. Fishing for saugers on the wing dams of Bass Camp & Homer landing was his joy. He treasured time spent deer hunting with his family during the fall season. Joe was a loyal Minnesota Twins fan and attended their spring training games in Fort Myers, Florida. He also enjoyed playing weekly Bingo and 500 with the Rollingstone Seniors.

Joe was a lifetime member of Holy Trinity Catholic Church and Parish School in Rollingstone.

He was preceded in death by his wife, Shirley; daughter, Deborah; his parents; his siblings; and many in-laws.