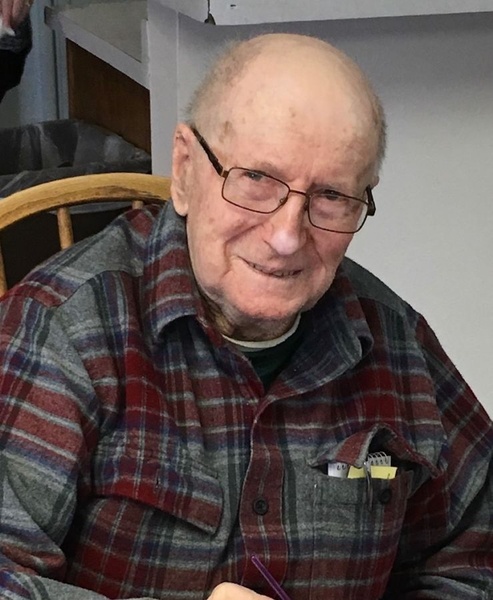 Joe was born on September 19, 1928, in Yucatan Township of Houston County, Minnesota to Joseph and Catherine (Kinsella) McManimon. He was raised on the Oak Ridge family farm and attended Rushford public schools, graduating in 1946. Joe served with the Army on the front in Korea from 1951-1953 as Private, First Class, member of the 715 Transportation Truck Company. Following his service, Joe attended veteran agriculture school. After 'traveling around the world' while in the Army, as his mother-in-law put it, Joe met Ione Dachel in Rochester, MN where she studied and worked as a registered nurse. It was a whirlwind romance with a proposal on St. Patrick's Day in 1957 and marriage at St. John the Baptist Catholic Church in Cooks Valley, WI on October 26, 1957. The couple moved to their farm on Oak Ridge in rural Houston, MN where, for nearly 60 years Joe and Ione farmed and raised their seven children. Joe had many hobbies including flying an airplane in his younger, bachelor years, woodworking which included constructing an outdoor Christmas nativity scene, making rocking horses and cradles for his family, and taking photographs. Joe honed his photography skills while serving in Korea and left our family with many cherished photo memories from his time in Korea, his early years with Mom, graduations, weddings, babies, 4-H fairs, and soil and water conservation projects across Houston County.

As a farmer who strongly believed in stewardship of the land, Joe served on the Root River Soil and Water Conservation District as a publicly elected official decades. He also served on the Yucatan Township board and Houston County Fair board. He was an active member of Rushford Post 94 American Legion. He dutifully participated in the Legion firing squad's annual Memorial Day service. On September 23, 2017 he flew on an Honor Flight for veterans to Washington, DC. His daughter, Margaret, accompanied him on the once-in-a-lifetime trip. Joseph's faith was incredibly important to him and he faithfully attended and supported St. Mary's Catholic Church in Houston. His family will fondly remember three items that were always next to 'his' chair; his journal which he wrote in daily his adult life, his prayer books which he read every morning, and his jar of candy which, even when partially hidden, every grandchild and great-grandchild could find.

There will be a Mass of Christian Burial for Joe on Monday, July 5, 2021, at 10:30 a.m. at St. Mary's Catholic Church in Houston, MN with Fr. Tom Melvin presiding. Visitation will be from 4:00 to 7:00 p.m. Sunday at the church. Visitation will also take place one hour prior to the service on Monday at the church. Burial will be at St. Mary's Catholic cemetery, rural Houston.

Hoff Funeral and Cremation Service in Houston, MN is assisting the family with arrangements.
Please leave a memory of Joe and sign his online guestbook at www.hofffuneral.com