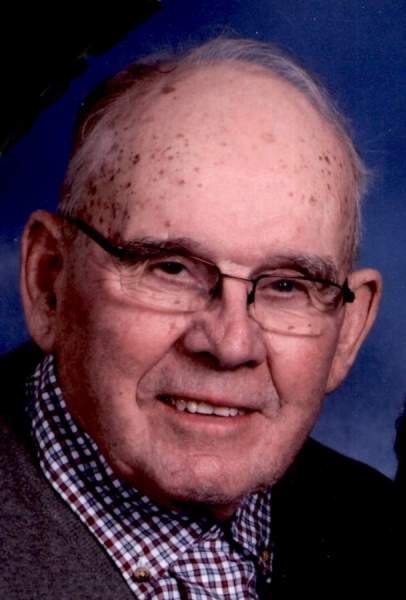 John Alfred Ferrier, 94, passed away on Thursday, December 3, 2020 at Arbor Gardens in Eyota, Minnesota.
John was born April 24, 1926 on the family farm in Olmsted County to Douglas & Frances (Burkhardt) Ferrier. John lost his mother early in life and was then raised by his stepmother Ardina (Lanz) Ferrier.
From the moment John could see over the tractor steering wheel, he started driving and it seems he never left the tractor seat. He had a great love and passion for the land and working it. He attended Dover School and the University of Minnesota School of Agriculture. Somewhere along the way he met a girl who he nicknamed "Blackie" for her jet-black hair. That girl was Elizabeth Schroeder, who became Elizabeth Ferrier on May 4, 1946. They settled on one of the family farms and raised three children together. John passed his great love of farming onto his two boys and a grandson. In 1974 John and his son, Craig, formed Ferrier Farms Partnership. John said he never had so much fun. John farmed up until his passing and was already looking forward to getting his digger out for spring work.
John was a humble and kind man, with a great zest for life. He believed that putting faith, family and hard work together could make one successful and proud. Throughout his life John proved this to be true. He had a heart of gold and a big smile for everyone. He played like a big kid with his grandchildren and great grandchildren.
John is survived by his loving wife of 74 years, Elizabeth Ferrier. Daughter, Charlotte (Dale) Allen. Sons, Thomas (Paula) Ferrier and Craig (Joan) Ferrier. Grandchildren, Cory (Barb) Allen, Carry Allen, Andrea (Zang) Duong, Brandon (Jen) Ferrier, Brooke (Brian) Hasleiet, Tanner (Lexi) Ferrier, Drew (Nikki) Ferrier, Kelli (Jared) Arn, Kendra (Brent) Liila, Lindsey (Garett) Houston and 16 great grandchildren. John is also survived by brothers Clayton (Carol) Ferrier and Burton (Judy) Ferrier.
John was proceeded in death by his infant daughter, Suzanne, mother, stepmother, father, and a great grandson, Nash.
The family wishes to thank Pastor Vollrath, Dr. Yaeger and his staff, Arbor Gardens and staff, and Hoff Funeral Home.
A private burial service will be held for family and close relatives on Wednesday, December 9th at 1 P.M at Evergreen Cemetery in Dover, Minnesota. Masks will be worn and social distancing measures will be observed during the service. Hoff Funeral Service of St. Charles is assisting the family with arrangements. Please share a memory of John at his on-line guestbook at www.hofffuneral.com.
Memorials may be made to Our Savior's Lutheran Church, 770 Robert Ave SW, Eyota, MN 55934.