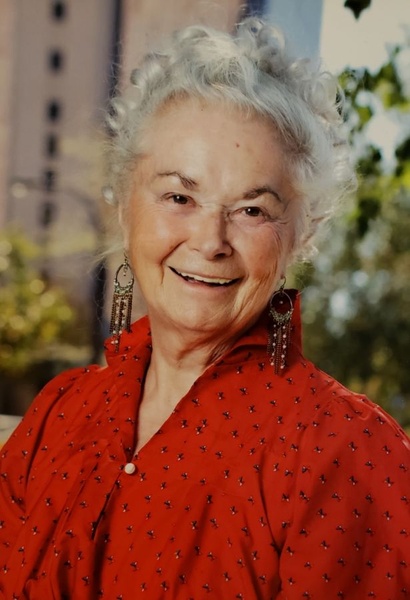 JoAn Lambert Kramer, of St. Charles, died Thursday, October 28, 2021 at Mayo Clinic Hospitals, St. Mary's Rochester Campus. She was born February 28, 1927 in Minneapolis, MN to Earl and Mable Lambert. JoAn graduated from Washburn High School in Minneapolis and earned a degree in Art at the University of Minnesota.
In 1948 she married Weldon Alexander "Red" Smith of Milroy, Minnesota. They had two daughters, René Alexandra and Barbara Jo "BJ". Weldon died in 1999 and she married Edward Kramer of St. Charles MN in 2011.
JoAn was brilliant, creative, energetic and optimistic. She considered herself an entrepreneur who started several businesses, ran two Bed and Breakfast Inns for many years, and was a member of four high IQ societies. She loved living in the woods and on the farm, and was a hard worker devoted to her hobbies. At various times, these included sculpture and ceramics; restoring homes and filling them with antiques; raising plants in her greenhouse and gardens; and taking care of her many pets. She also enjoyed crossword puzzles and astrology, and held fond memories of dancing with Eddie, birthday getaways with her daughters, walks with her dogs, and Eddie's undying love.
JoAn will be dearly missed by her husband, Eddie Kramer of St. Charles, her daughter BJ (John) Kohlstedt of Finland MN, son-in-law Mark Carlson of Chetek WI, and her beloved pets. She was preceded in death by her sisters Pauline Lambert and Patricia Lambert, and her daughter René Carlson.
A Funeral Mass for JoAn will be 11 a.m. Monday, November 1, 2021, at St. Aloysius Catholic Church in Elba with the Reverend Tim Biren officiating. Burial will follow in the church cemetery. A visitation will be from 10 a.m. until the time of services at the church on Monday.
Hoff Funeral Service of St. Charles is assisting the family with arrangements. www.hofffuneral.com.