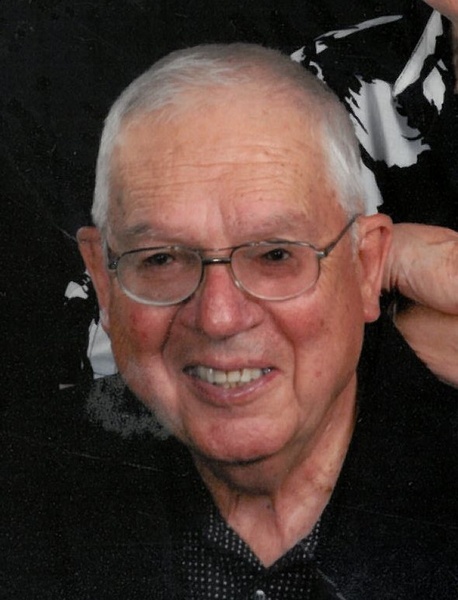 Jim Rainey, 89, of St. Charles died Monday, October 4, 2021, at his home. Jim was born at home, December 20, 1931. He graduated from St. Charles High School and attended Winona State, majoring in music. Jim then entered the United States Navy, serving on the Carrier U.S. Philippine Sea during the Korean War. Following his discharge from the Navy, Jim went to work at a sawmill at Eugene, Oregon for a year. He then returned to St. Charles and married Jeanne Reisdorf October 12, 1957, at St. Mary's Church, Oak Ridge in Winona County. They made their home at the Rainey family farm south of St. Charles. Jim worked for Home Produce in St. Charles, before going to work at First National Bank, later Merchants Bank in the insurance and trust department. He later worked for Smith Agency in St. Charles until his retirement. Jim also clerked for auctions with Murt Boyum for many years.
In Jim's early years, he had a passion for music and was classically trained on the piano. Following his service in the Navy he set his music aside, until his later years when he rediscovered the great joy his music brought him and those around him.
His greatest passion was fishing. He fondly remembered biking to Saratoga to fish as a boy. He went on to share his fishing passion with his sons and grandchildren, as well as many friends.
Jim was a member of St. Charles Borromeo Catholic Church and the St. Charles Veterans of Foreign Wars Post.
Survivors include his wife, Jeanne, two sons, Dan (Carol) Rainey of Stewartville and Fran (Dawn) Rainey of St. Charles, grandchildren; Sarah (Andy) Dwyer, Emily (David) Fritsch, Julie (Richard) Visger, Mike (Lori) Rainey, Tim (Jessi) Rainey and Laura Rainey, great-grandchildren, Tegan, Tucker, Madison, Ben, Abbie, Elsa, Owen, and Noah. Jim was preceded in death by a sister, Vesta and two brothers, Guy and Jack.
A Funeral Mass will be 2 p.m. Saturday, October 9, 2021, at St. Charles Borromeo Catholic Church with the Reverend Tim Biren officiating. Military honors will follow outside the church. There will be a visitation held from 3 p.m. to 7 p.m. on Friday, October 8 at the Hoff Funeral Home of St. Charles, as well as one hour prior to the Mass on Saturday at the church. Burial will be at Saratoga Cemetery. Please share a memory of Jim at his online guestbook and view his video tribute, when it becomes available at www.hofffuneral.com.
In lieu of flowers, memorials are preferred to the church. Hoff Funeral Service of St. Charles is assisting the family with arrangements.