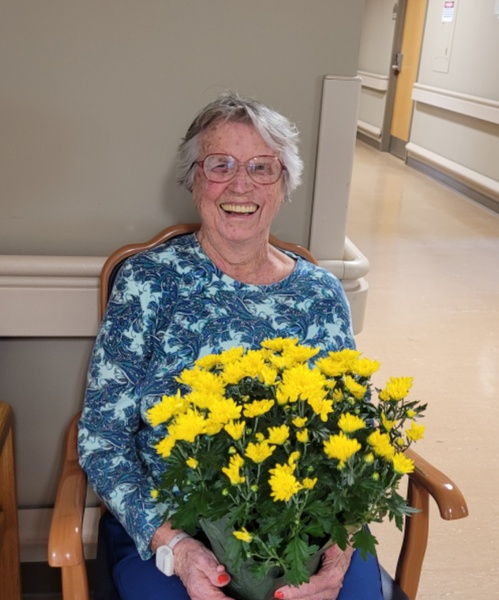 Janette Josephine Husman, age 93, died at St. Anne in Winona on Saturday, May 7, 2022. She was born on October 6, 1928 in La Crosse, Wisconsin to Joseph and Anna (Schumacher) Gady. The first nine years of her life she lived near Nodine; on the farm her grandfather, August Goede had homesteaded in 1873. She and her sister, Rita, went to school in Pine Creek; where Forster Road meets Houston County Road 6. When she was in the third grade the family moved to Pleasant Hill Township. Janette had four younger brothers, so she helped her father milk cows by hand.

Janette married Donald William Husman in Nodine at the St. John’s parsonage on April 15, 1950. She was a hard-working farm wife, milking cows, feeding calves, and driving tractor. She drove a car, but didn’t have a license, only a permit. In 1990, after Don died, she got her driver’s license. Janette loved to dance to “Old Time” music, polkas, and waltzes. On Saturday nights she would take her daughters Pam and Donna, along with some of the neighborhood girls to Witoka; dance from nine until one and get up and milk cows in the morning.

Don and Janette built a new house on the farm in 1975. In 1982 they bought her cousin Robert Gady’s farm in Ridgeway. When they lived in Ridgeway; she worked at the school helping on the playground and helped monitor the lunchroom. She was a member of St. Luke’s Lutheran Church in Pickwick where she is famous for her scalloped potatoes. She liked to play cards, grow flowers and vegetables, and loved dill pickles!

A funeral service will be held on Thursday, May 12, 2022 at St. Luke’s Lutheran Church in Pickwick, Minnesota at 11 A.M. A visitation will be held prior to the service on Thursday, May 12, 2022 from 9 A.M. to 11 A.M. Burial will be following the funeral service at Bush Cemetery in Ridgeway, Minnesota. Hoff Celebration of Life Center is assisting the family with arrangements.