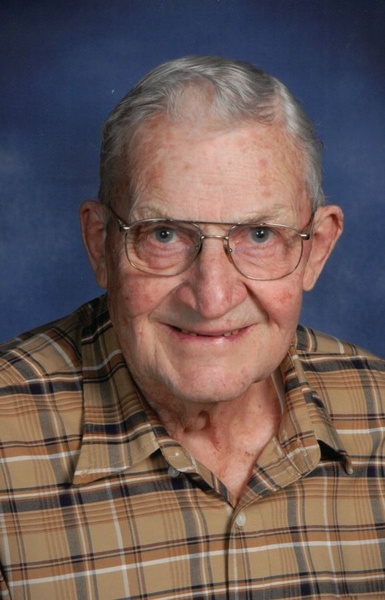 ROLLINGSTONE -- James "Jim" Kreidermacher, 95, of Rollingstone died Saturday, Nov. 14, 2020, at Brookdale Senior Living in Winona, of natural causes. Jim was born June 26, 1925, on the family farm in Mount Vernon Township, rural Rollingstone. His parents were Lawrence and Hedwig 'Hattie' (Kohner) Kreidermacher.
Jim met Rosemary "Rosie" Schmit in the third grade at Holy Trinity School. They were 22 years old when they married on Oct. 11, 1947, at Holy Trinity Catholic Church in Rollingstone. After high school, Jim worked at several area farms and then worked for Rosie's father at what is now Rollingstone Feed & Grain. He became a partner with Bob Schmit in 1945, and then passed the business to his son Paul in 1990. Jim continued working there until he retired in 2007. Even after retirement, Jim continued to walk to the mill most mornings to greet customers and pass the time.
Jim will be most remembered for his infectious laugh and constant jokes. He was never afraid to bend the rules a bit if it put a smile on someone's face. Jim and Rosie's kitchen table was always open to anyone who dropped by for conversation and stories. Jim also enjoyed many years of bowling league and golfing with best friends Fritz and Theresa Hoffman.
He taught us all the importance of adaptability. When Rose couldn't care for the home anymore due to Alzheimer's disease, he learned to cook and do laundry. When his friends and family passed away, he made new friends who kept him feeling young. When the town's bar burned down, his kitchen became the meeting place on Friday evenings. Jim was in the Sunset Lions Club, receiving the Melvin Jones outstanding service award, and he volunteered for 30 years at the Rollingstone Fire Department. He belonged to the Rollingstone Business Association and was a Hubbard Dealer board member. Jim was a lifelong active member of Holy Trinity Catholic Church and a member of both the Knights of Columbus and the Elks.
Survivors include two children, LouAnn (Scott) Wiens of Lewiston and Paul (Mary) Kreidermacher of Rollingstone, and son-in-law Bob (Brenda) Jones of Hastings; six grandchildren, Brian (Christianne) Jones & Michael (Stephanie) Jones, Michelle (Darren) Ginther & Jessica (Dan) Wiens, Adam Kreidermacher & Sam (Laura) Kreidermacher; six great-grandchildren--Lalayna, Lola & Hattie Jones, Carsten & Lucy Ginther, Eleanor Kreidermacher, and one more on the way. Jim was preceded in death by his daughter Jane Jones and his wife of 65 years, Rose, as well as brothers and sisters--Francis, Bernice Semling, Winifred Tlougan, Leonard, Robert, Conrad and Jack.
Jim's family would like to thank Brookdale Senior Living staff for their care during his short two months living there.
A prayer service will be 11:30 a.m., Saturday, November 21, 2020 at Holy Trinity Catholic Church with the Reverend Will Thompson officiating. Visitation will be 10 a.m., until 11:30 a.m. He will be laid to rest at Holy Trinity Cemetery. Please wear a mask and follow social distancing protocols. Cards may be mailed to: Hoff Funeral Home, c/o Jim Kreidermacher Family, 3480 Service Drive, Goodview, MN 55987. Hoff Celebration of Life Center-Goodview is assisting the family with arrangements. Please share a memory of Jim, sign his online guestbook and view his video tribute when it becomes available at www.hofffuneral.com.