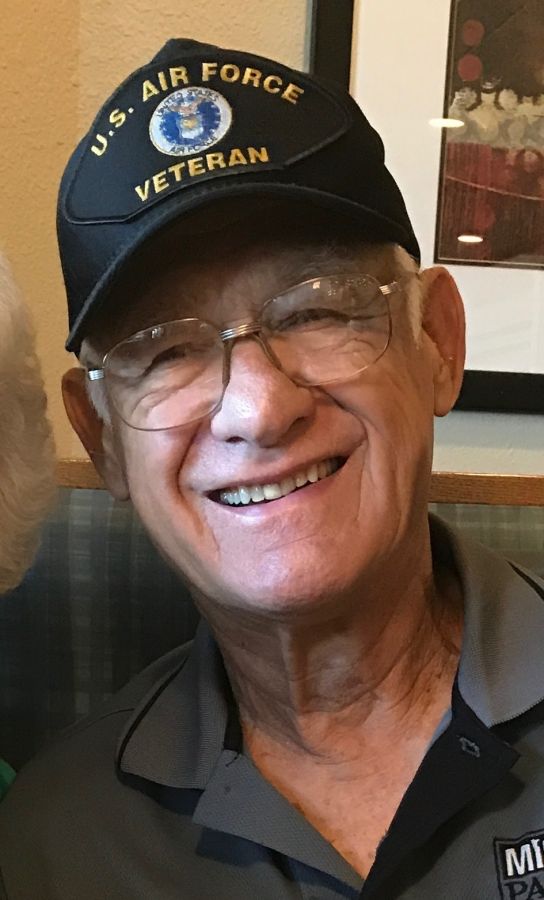 James Stanley "Jim" Speltz, 83, of Minnesota City died peacefully on Friday, August 7, 2020 doing what he came to love-farming. He was a beloved Husband, Dad, Grandpa and FRIEND. These were just a few of the titles Jim was known for, but they were also the roles he took most pride in. Jim was born December 29, 1936 in Rollingstone, MN to Arnold & Lillian (Maus) Speltz; one of ten children growing up in the midst of the Great Depression. He would often remark that though they didn't have much, they had what they needed and would proudly explain how his mother would never fail to feed their large family on the wood-fired stove. Jim spent his entire life in the beautiful hills of Rollingstone with the exception of his service in the military as an Airmen Second Class from 1955 through 1959. Wanting to buy himself a bicycle, Jim left the family home at the age 13 where he worked and lodged at neighboring farms. Jim respected and talked highly of his education at Holy Trinity Catholic School under the direction of the nuns where he graduated in 1955. As a "know-nothing 18-year-old" and finding farming to be hard work with little pay, Jim joined the Air Force where he found joking around was no longer accepted and the farm kid turned into a highly skilled and valued electrical and mechanical crypto-maintenance technician stationed in Thule, Greenland-a place Jim referenced as "the end of the world," except for the cards he would receive from a girl back home that reminded him he could make it through. Jim was also gifted in music and he was selected for a spot in the Air Force Band playing trumpet. He was honorably discharged in 1959 and returned to marry "his bride" Shirley Ann Yarolimek on October 17, 1959. In 1960 Jim & his brother Joe bought their first Texaco service station in Winona - Speltz 66. They later expanded across the river and added bulk plants where their brothers Ed and Sam were a part of the success. In 1975, Jim & Shirley bought the Yarolimek family farm where they raised their four children: Amy, Marty, Valerie, and Jason. Jim & Joe "retired" and sold the businesses in 1993. Jim kept busy improving their Century farm and crop farming with his nephew Mark. Jim found great joy in rebuilding tractors, fixing cars, or tearing apart anything on the farm that didn't function just so. He certified in and dabbled in real estate sales, played the trumpet, bass horn, and the tuba with many local polka bands, most recently with Ron's Old Tyme Band, and he truly loved a day off fishing with friends or family. He used his woodlands to gather his family and friends where they all shared in his love of hunting, target shooting or watching the sun go down. Little excited him more than when he would hear the shotgun of a grandchild and would hurry to their side to see if they got the big one. He was known for his grilling of drunken chicken, gathering loved ones for making his annual tripen and secret deer sausage recipe, the Speltz dills, and let's not forget all the wood cutting & piling that so many were privileged to take part in! When the winters slowed things down, you would find Jim cracking walnut & hickory nuts tapping his toes to polka music until it was time for the news. As their 8 granddaughters and 1 grandson ("the girls") started in activities, Grandpa and Grandma were often in the audience cheering them on. He was the number one sampler of baked goods and everyone knew he had at least 3 tubs of ice cream in the freezer with at least 3 cans of whipped cream in the fridge so he could spoil the grandkids anytime they walked in the door. Lessons of efficiency and mechanics were learned in his shop, he made sure you knew how to mend a fence properly, how to pack a pickle jar correctly after the freezing ice water, and how not to burn yourself while making Grandma Ramer's popcorn balls. Jim was the core of the Speltz family and countless memories with him will remain with his children, grandchildren, friends & family and his right-hand man Troy Pozanc who referred to him as "Farmer" and who Jim loved as a son. Jim was dedicated to his work, his wife, his family, his country and his God. He never let a challenge hold him back very long. He truly lived and shared his life to the best of his ability. Jim left his family and friends with not only memories but grateful hearts of all the things he shared with so many in countless ways. He leaves behind his wife Shirley of 60 years, his eldest daughter Amy & son-in-law Eric and their girls Allison (Jonah Woodward), Brynn, Anissa, & Aase; his daughter Valerie & son-in-law Brian and their girls Megan & Bridget; his son Jason & daughter-in-law Carrie and their daughters Raelynn and Jaynah (John Heim) and son Spencer James; a sister-in-law Rosie (Donald), his brothers Ed (Rita), Joe (Mary), Sam (Kathy), and Ken (Jayne) and their families. He is now at the ultimate table (and likely sharing his latest polka favorite) with his son Marty, his parents, his sisters Annabelle, Elaine (Barney) Foster & Jean (Robert) Clappier, and brothers Donnie & Rodney...and that's the way she goes.
A visitation will be held on Wednesday, August 12th from 4-7 pm at Holy Trinity Catholic Church in Rollingstone, MN followed by a Funeral Mass at 10 am at Holy Trinity on Thursday, August 13th with the Reverend Chinnappa Pothireddy officiating. Masks & social distancing are required. Hoff Celebration of Life Center - Goodview is assisting the family with arrangements. Please share a memory of Jim, sign his online guestbook and view his video tribute at www.hofffuneral.com.