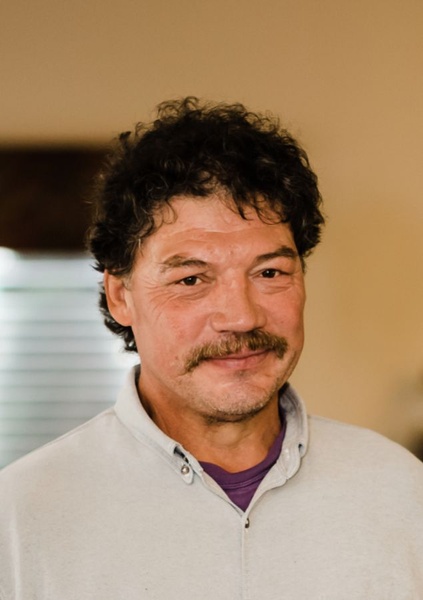 James (Jimmy, Jim, JP) Michael Paulson was a local celebrity born on May 11, 1961, in La Crosse, Wisconsin, to Berton and Ioen (Thompson) Paulson. On March 1st, he tragically and unexpectedly passed away while at work. He was only 60 years old.
Jim graduated from being a Houston Hurricane in 1979, where he participated in wrestling and football, earning many awards for his stellar performances. Because being a studly athlete wasn't enough, he was also a very talented artist and had a heart of pure gold.
He worked the family dairy farm from age 15 until he was pertnear 40 and lived near his parent's farm in Mound Prairie through the entirety of his life, completely immersing himself in the outdoors. He was often found sitting (or dancing terribly while playing his rake or shovel) by the fire, rewarding himself as any self-respecting, hard-working man would. While indoors, he enjoyed coaching the Vikings, Twins, Gophers, and Wild from the couch - they sure are lucky he was there to set the refs straight!
Deer Camp was a highly anticipated event in which a few close friends would join in obnoxious singing and marching around the kitchen table, stories around the fire, and of course, Peppermint Schnapps, which was used for the christening of all new hunters.
Jim was an unfortunate slave to addiction, but he adored his children and gave them wonderful childhood memories among the not-so-good days. Very seldom was there a time he refused sporting activities with his children. At Dad's, there was always a lesson taught, and fun was had.
Jim is survived by his loving mother, Ioen Paulson; his partner of more than 20 years, Lori Potaracke; children, Mikayla (Dalton) Mensink and Garrett Thornton-Paulson; beloved grandchildren, Piper and Jade; siblings, Cathy (Dick) Stutzka, Kevin (Rosie) Paulson, and Patty Paulson; 7 nieces and nephews; and a few aunts and uncles.
He was preceded in death by his father, Berton Paulson; infant brother, Berton Edwin Paulson; aunts and uncles, grandparents, and John Wayne.
There will be a service for Jim at Looney Valley Lutheran Church in Houston on Friday, March 11th at 1 p.m. Following the service on Friday there will be a visitation from 4:00-7:00 p.m. at Hoff Funeral Home in Houston.