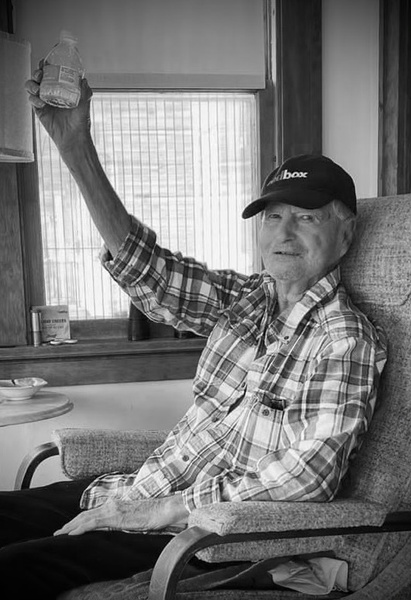 Jack Bernard Nelson, 99 of Winona, died Thursday, August 26, 2021 at his home.
Jack was born December 13, 1921 in Buxton, Iowa. He was raised in Winona, MN where he graduated from Winona Senior High School. He served his country honorably in the United States Navy during WWII as a 2nd class Petty Officer. He worked for the City of Winona for many years in the Wastewater Treatment Plant. On October 10, 1953, he married his sweetheart, Betty Mullen. They spent many wonderful years together until her passing in 2009.
Jack loved the outdoors, especially being in the sun. He enjoyed going for bicycle rides, motorcycle rides, fast cars and car auctions. He also treasured being on the water as well as water skiing, which he was even able to do into his 70's. He was talented in being able to repair bikes, motorcycles, cars, just about anything he could get his hands on. He fixed up and sold many bikes throughout his day. His two granddaughters, Morgan and Madison were his true pride and joy.
He is survived by his daughter, Joni (Ted) Benson and two granddaughters, Morgan & Madison Benson.
He was preceded in death by his wife, Betty; daughter, Jayne Nelson; and his parents, Victor and Mabel (Nelson) Matson.
Jack's family would like to extend a heartfelt thank you to the Winona Police Department for the care, compassion, and friendship to Jack over the years. Also, his two amazing caregivers, Emily Holden and Kelsey Erickson for making it possible for Jack to remain in his home as well as his neighbors for always watching out for him.
Per his wishes, services will be held privately, and he will be laid to rest at Fort Snelling National Cemetery. In his memory, go for a long bike ride, donate a bike to someone in need or sit outside and enjoy the sunshine.
Hoff Celebration of Life Center is assisting the family with arrangements. Cards may be mailed to: Hoff Funeral Home, c/o Jack Nelson Family, 3480 Service Drive, Goodview, MN 55987. www.hofffuneral.com