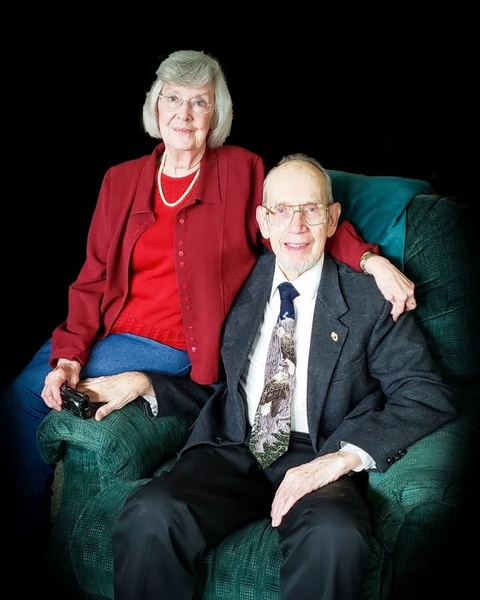 Phil Sorensen was born November 26, 1932 in Council Bluffs, Iowa to James and Jennie (Sorensen) Sorensen. He passed away on December 3, 2019. Phil married Barbara Bolender on September 2, 1956 in Lima, Ohio. He graduated from Abraham Lincoln in Council Bluffs, Iowa and St. Paul Bible College in St. Paul, Minnesota. In his 60's he attended Denver Seminary, in Colorado. Phil was a member of the Christian and Missionary Alliance church from 1947.
Phil loved to read; it was his best pastime. He spent time fishing and hunting while he lived in Minnesota. Phil was a little shy when he first met you, but he was warm and gracious toward everyone. He was easy to talk to, warm and gentle. He kept people laughing in his later years by quipping, "I'm ornery as ever and to old to change!"
He loved being available to God to be an avenue of blessing to someone. Long hours in the church work and later the hospital were filled with joy and encouragement.
Phil was ordained by the Christian and Missionary Alliance in Glasgow, Montana and served in pastorates in Glasgow, Montana; Staples, Clarkfield, and Milaca, Minnesota; Mason City, Iowa and Omaha and Stratton, Nebraska. After 35 years of ministry, Phil earned his certification in Clinical Pastoral Education and served as Chaplain at St. Mary-Corwin Hospital for 13 years, retiring at 73.
Phil is survived by his wife of 63 years, Barbara; two children, Linda (Jim) Grupa and Jeff (Ruth) Sorensen; daughter-in-law, Amy Sorensen; brother, Richard Sorensen of Spencer, Iowa; grandchildren: Brian, Erin, Angela, Daniel, Beth, John, David, Rachel and Hannah, and 18 great grandchildren. He was preceded in death by his parents, James and Jennie Sorensen and son, Stephen 'Steve' Sorensen and daughter-in-law, Kristin Sorensen.
A memorial service will be held at 11 a.m. Friday, Dec. 6, 2019 at Church of the Nazarene in Winona, Minnesota, with the Rev. Randy Burg officiating. Visitation will be from 10 a.m. until the time of the service at the church. Please leave a memory of Philip and view his video tribute when it becomes available at www.hofffuneral.com. Hoff Celebration of Life Center, Goodview, is assisting the family.
Memorials are encouraged and will be given to the missionary endeavors of the Christian and Mission Alliance (church) through it's Great Commission Fund. Checks should be made out to the "CM&A" with "GCF Fund" on the memo.

Church of the Nazarene

Church of the Nazarene