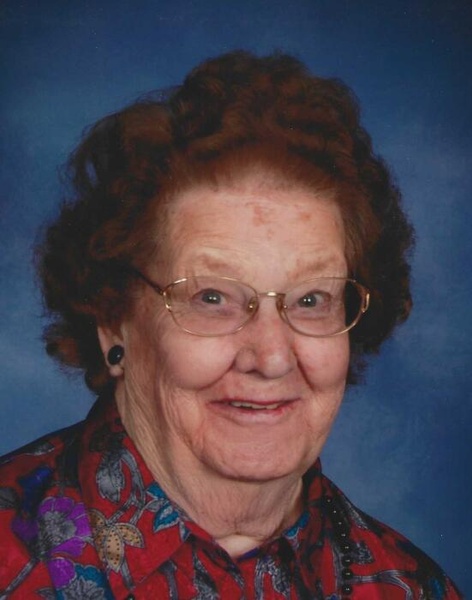 Our mother Ione Dorthea Hallum was called home by her heavenly father on July 23, 2021 at the age of 94 years old.

Ione was born at home on her family's farm near Isinors, MN on August 7th, 1926. She was the fifth of seven children to Ludvig & Edna (Tokvam) Knutson. She began school at the Clear Grif country school and later attended the Ask Country school, when the family purchased a farm on North Prairie, MN.

She grew up helping the family with the farm due to her father's failing health. She also worked as a waitress at the Victory Café in Preston, MN. She was introduced to the best friend of her sister's boyfriend, Edwin, and that began a relationship that led to marriage on June 14th, 1947.

Edwin & Ione began their farming career by renting farms on a partnership with the owners and eventually purchased their first farm in 1959. Ione worked alongside Edwin caring for the dairy cattle, beef cattle, hogs & chickens. She loved to bake, cook & entertain others with her meals. She always made coffee and a lunch for anyone who stopped by to visit. She maintained a large vegetable garden along with many flowers spread around the lawn in their manicured beds. She also made many wedding and anniversary cakes. She would always have a novelty birthday or celebration cake made for the children & grandchildren.

Ione was a Sunday school teacher for many years at both the Whalen and South Fork congregations. Edwin & Ione spent their retirement years on the farm, but as Edwin's health began to fail, they purchased a home in Rushford. After Edwin's passing, Ione began to show signs of dementia, which led to her decision to move to the Good Shepherd Nursing Home. She spent her remaining years there as she struggled with the progression of the disease. While the dementia may have taken her memory, it never took her smile.

She was preceded in death by her parents, her husband Edwin, her grandson Bradley Danielson, her son-in-law Dennis Danielson, her sisters Lucille, Hazel (Emil) Twedt, and Deloris (Leon) Bailey and her brothers Edward, Ernest & Merle.

Funeral services will be 1 P.M., Tuesday, July 27, 2021 at Highland Prairie Lutheran Church, rural Peterson, MN with visitation 2 hours prior to services. Pastor Kay Wold will officiate followed with burial next to Edwin at the Highland Prairie Cemetery.

The family prefers memorials be given to the Highland Prairie Lutheran Church Cemetery Association.

The family would like to extend a warm thank you to the staff of Good Shepherd Lutheran Nursing Home, the staff of St. Croix Hospice care, as well as to Pastor Luther Mathsen & Pastor Kay Wold.

Online condolences are welcome at rileyfuneralhomes.com