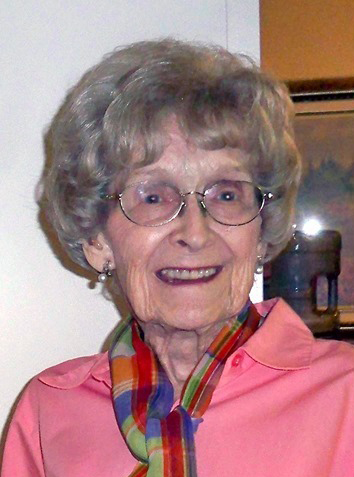 Hope (Sterling) Britson passed away peacefully in her sleep on Sunday, June 7, 2020 at St. Anne Extended Healthcare in Winona, MN.
Hope was born on November 18, 1925 in Sioux City, Iowa, the 5th of 7 children of Robert Chase Sterling and Ruth Thyra Blom (born in Sweden). Even though she grew up in the Great Depression, her stories of childhood were that "we had so little, but boy did we have fun." She loved music from day one, and was encouraged by her older brother Bobby to develop her beautiful singing voice.
Hope met her husband William Britson at (then named) Iowa State Teachers College in Cedar Falls. They were married at the Little Brown Church, Nashua, IA in 1946. After the birth of their first daughter Barbara in 1948, they moved to Storm Lake, IA, where they lived for the next twelve years. Their second daughter Susan was born in 1952, and Hope finished her BA degree in Music in 1958, and began her teaching career. They moved to Marshalltown in 1960, where she taught Elementary Music in public and parochial schools. She was an active member of the First Presbyterian Church.
Hope loved to put on music programs, whether in a school setting, informally with the neighborhood kids, or with other opera lovers in her Tuesday Musical group. She also performed in community theater productions.
Being out in nature was another of Hope's loves, especially in Colorado's Rocky Mountains, where she and Bill often spent summer vacations. She was known to drag a sewing machine or typewriter out to a picnic table to avoid being inside during nice weather. Hope also loved spending time with each of her grandsons - Barbara's son Joel, and Sue's son Evan - whenever she could. She always got a kick out of being around little kids.
After Bill's death in 2006, Hope moved close to Barbara, eventually residing in Winona, MN, first at Callista Court, and then St. Anne Extended Healthcare. She was still assisting with group sing-alongs until just a few years ago.
Hope is survived by her daughters, Barbara Hassing and Sue Britson, grandson Evan Britson, great-granddaughters Lela and Emma Britson, and son-in-law Michael Hassing. She is preceded in death by her parents and six siblings, her husband Bill, and grandson Joel.
Private family services will take place at a later date. Cards may be sent to Hoff Celebration of Life Center, 3480 Service Drive, Goodview, MN 55987. Hoff Celebration of Life Center is assisting the family with arrangements. www.hofffuneral.com.