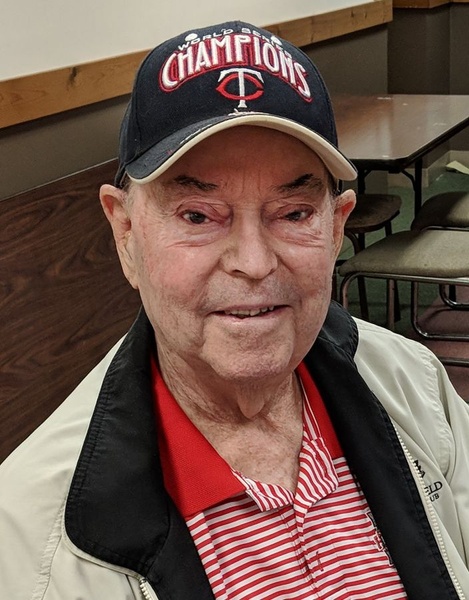 Dr. Henry Allen "Hank" Van Kirk, 87, of the Kensington in Winona, died December 11, 2019, in hospice care at Saint Anne's of Winona. Hank was born in Clearwater, Nebraska, April 29, 1932, to James and Zelma (Holm) Van Kirk. When Hank was 9, his family moved to Neligh, Nebraska. As a child, Hank loved his pony Prince, playing golf, and keeping his beloved parents and sister Shirley on their toes. Hank excelled in sports. He graduated high school in 1950 having achieved 12 athletic letters. Unbeknownst to his parents at the time, he also excelled in shooting pool, which he continued playing expertly until weeks before his death.

Hank attended Doane University and Norfolk Junior College in Nebraska before serving as a staff sergeant in the U.S. Air Force Security Service as a radio intercept from 1952 to 1956. During his time in the service in England, he played football in the European Football League. He returned to the states and got his undergraduate degree from Wayne State University, Wayne, Nebraska, and his master's and doctorate in educational psychology and counseling from University of Northern Colorado in Greeley. While at Wayne, he met Alyce Buschelman of Crofton, Nebraska, on a blind date, where he impressed her by taking her to a high school basketball game that he then refereed. She reluctantly agreed to a second date. They were united in marriage March 29, 1958.

Hank's early career was as a classroom teacher, guidance counselor, and coach (track and football) in Osmond and Pierce, Nebraska, and Longmont and Greeley, Colorado. He taught at Winona State University from 1968 to 1991 in the counselor education graduate program. He was incredibly proud of his many WSU students who went on to become excellent educators and counselors. He was the WSU assistant men's basketball coach from 1985 to 1989, during which the Warrior defense was ranked second in the nation. In 2002, he was 70 and enjoying retirement when he took the head boys basketball coaching position at Houston High School, Houston, Minnesota, for a single season. Despite being initially called "Coach Grandpa," by a few players, Hank led the Hurricanes to scoring records and their most-winning season in many years.

He was named a Colorado Outstanding Guidance Counselor in 1967 and a Distinguished Alumnus of his high school in 2005. He was a 50-year member of First Congregational Church UCC and a longtime member of the American Legion, Westfield Golf Club, Friendship Center and the YMCA in Winona. He received his 60-year pin from the Masonic Lodge in 2014. In his spare time, Hank volunteered as a cancer support group facilitator. His hobbies included handball, golf, and tournament pool at the Winona Friendship Center. He played noon pick-up basketball with WSU students until he was well into his 70s. He loved sports, especially the Nebraska Cornhuskers, Minnesota Vikings, Minnesota Twins, and Winona State Warrior football and basketball. He also thoroughly enjoyed participating in a Freedom Honor Flight, accompanied by his grandson Sam.

A celebration of life will be held in Winona at a later date. Burial this spring will be at Laurel Hill Cemetery in Neligh, Nebraska. In lieu of flowers, please consider a memorial to the organization of your choice or the Westfield Golf Club Junior Golf Program, Winona, Minnesota. The family wishes to thank St. Anne's Extended Healthcare, Winona Area Hospice, Winona Health, and Mayo Clinic-Rochester.

Hoff Celebration of Life Center - Goodview is assisting the family with arrangements. Please share a memory of Hank and sign his online guestbook at www.hofffuneral.com.