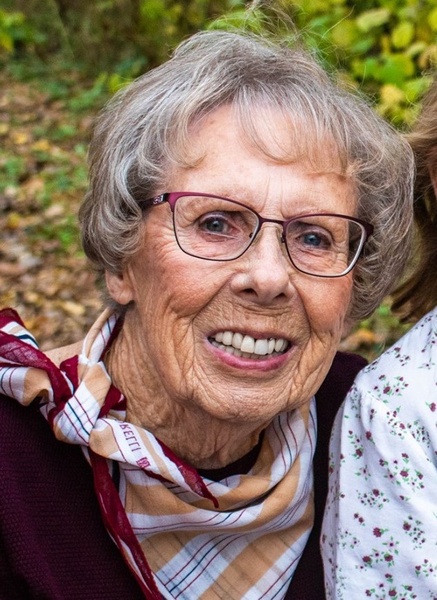 Helen's Funeral Mass will be recorded to the Root River Catholics You Tube page and can be viewed there when it is posted following the Funeral Mass.

Rushford, MN - Helen Dorothy Novlan, 93, of Rushford, MN died on Sunday, April 11, 2021,
at her home with her loved ones at her side.
On April 30, 1927, Helen Dorothy Park was born to Walter and Olga (Salonen) Park in
Eveleth, MN. It is there that she grew up and graduated from Eveleth High School. As a child,
her favorite thing to do was to play beauty operator and this led to studies in cosmetology and
graduation from Ritter's Beauty School in St. Paul, MN. A special highlight during these early
years occurred on September 6, 1947 in Eveleth when Helen was united in marriage to her
"special man", Stanley Novlan. It was in 1960 that Helen and Stanley moved to their
"forever home"... Rushford. Following true to her passion, Helen owned and operated her
own beauty salon for the next fifty years while Stanley taught AG at Rushford High School and
worked passionately with the Future Farmers of America Organization. Sadly, Stanley passed away
in 1987.
For 61 years, Helen embraced and actively participated in all aspects of life in Rushford. This
included her love of gardening, her beloved cat named Critter, playing golf... mostly with the men
(provided that they "walked the course"!!) and bowling for 23 years on the Rushford Foods
Bowling Team. Most of all, volunteering and "being of service to others" defined Helen.
Since 1961, Helen was a member of St. Joseph's Catholic Church and currently was a trustee and
member of the finance committee. She is known most affectionately as St. Joseph's "Mother
Superior".
In 1962, Helen began her service to the Rushford American Legion Auxiliary Post 94. She
held the office of president for three years which was followed by an active commitment to the
organization and its good works. A special yearly
effort included the placement and removal of crosses on the graves of all veterans.
Helen's efforts extended to a seat on the Winona Votech Cosmetology Board and also Winona
Votech's General Board until it was incorporated into Winona State, long term membership and
secretary responsibilities for a time in the Rushford Historical Society, volunteering at the
Good Shepherd Lutheran Services, delivering Meals on Wheels for decades, being a member of
Rushford's Zoning Appeals Board and also being the best babysitter for Julisa and Charlie
Kinneberg!
Community recognition of Helen's efforts occurred in 1995 when Helen and Doc Pete were
named Mr. and Mrs. Rushford for the Homecoming Celebration. Reflecting back on her
life, Helen said she would like to be remembered for "just being me".
Helen was preceded in death by her parents, husband Stanley, and niece Nancy Jones.
She is survived by her sister, Ruth Johnson; nephews and nieces: Charles (Barb) Durham,
Jackie Kindsvater, Steve and Edith Novak, CeCe Novlan, Karen Robinson, Shirley and Mike Tanko,
Nancy and Marc Sager; nephew-in law Jerry Jones; many great nieces and nephews; and her
"Chosen Family": Jed and Melisa Kinneberg and children, Julisa and Charlie who named Helen
"Grandma Henner", and Andrea Konetchy.
There will be a Funeral Mass at St. Joseph's Catholic Church in Rushford for Helen on
Saturday, April 24, 2021 at 11:00am with Monsignor Tom Melvin officiating. Burial will
follow at the Catholic Cemetery in Rushford. Visitation will be on Friday, April 23rd
from 4:00-7:00 pm at Hoff Funeral Home in Rushford and also one hour prior to the
Mass on the 24th at the church. It is the family's preference that memorials in
Helen's memory be made to:
• St. Joseph's Catholic Church, Rushford
• Rushford-Peterson Future Farmers of America
• Good Shepherd Lutheran Services
All donations may be mailed in care of: The Helen Novlan family, Hoff Funeral Home,
PO Box 625, Rushford, MN 55971
Please leave a memory of Helen and sign her online guestbook at: www.hofffuneral.com Hoff
Funeral Home - Rushford is assisting Helen's family with arrangements.